JAKARTA, April 23 (Bernama): Leaders of the Association of South-East Asian Nations (ASEAN) will meet in Jakarta on Saturday to discuss the Myanmar crisis, reported Anadolu Agency.

Indonesian Foreign Ministry spokesperson Teuku Faizasyah said Thursday that the summit will be held in Jakarta and not Brunei Darussalam because it coincides with the location of the Asean Secretariat office.

However, the Sultan of Brunei Darussalam, Hassanal Bolkiah, will chair the meeting.

Brunei is the current chair of Asean, which is elected annually on a rotating basis between the 10 member countries.

Indonesian Foreign Minister Retno Marsudi is scheduled to meet with the UN Envoy for Myanmar, Christine Schraner Burgener, in Jakarta.

Faizasyah said the two would discuss developments in Myanmar.

However, he could not confirm when the meeting between the two will take place, but it is expected to be held on Friday.

As of Wednesday, the Companion Association for Political Prisoners (AAPP) reported that 739 people had been killed in demonstrations against Myanmar’s Feb.1 military coup and 3,331 people had been detained. - Bernama 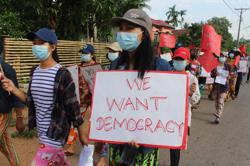