China urges Japan to reflect upon history of aggression

BEIJING (Xinhua): A Chinese foreign ministry spokesperson on Wednesday (April 21) urged Japan to earnestly reflect upon its history of aggression and take practical steps to win trust from neighbouring countries.

"China urges Japan to hold fast to the principles established in the four political documents between China and Japan, as well as the four-point principled agreement, and face up to and earnestly reflect upon its history of aggression," spokesperson Wang Wenbin said at a daily press briefing.

Wang's remarks came after Japanese Prime Minister Yoshihide Suga sent a ritual offering on Wednesday to the notorious Yasukuni Shrine, seen as a symbol of Japan's past militarizm, on the occasion of its spring festival.

He urged Japan to make a clear break with militarism and take practical actions to win trust from its Asian neighbours as well as the international community. 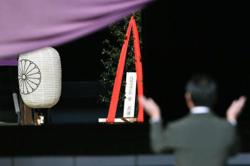