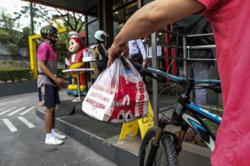 MANILA, April 20 (Xinhua): The number of confirmed Covid-19 cases in the Philippines surged to 953,106 after the Department of Health (DOH) reported 7,379 new cases on Tuesday.

The DOH said 93 more patients have succumbed to the viral disease, bringing the death toll to 16,141.

The Philippines, which has about 110 million population, has tested over 10.5 million people since the outbreak started in January 2020.

The Philippines' Food and Drug Administration (FDA) has granted the emergency authorization to use COVID-19 vaccines made by Johnson & Johnson and India's Bharat Biotech, FDA Director General Enrique Domingo confirmed on Tuesday.

The FDA has granted emergency use authorisation to coronavirus vaccines of Pfizer-BioNTech, AstraZeneca, China's Sinovac and Russia's Sputnik V. Meanwhile, it was reported by Reuters that a two-week lockdown of the capital region, an urban sprawl of 16 cities that is home to at least 13 million people, appears to have done little to ease the strain on the medical system.

Intensive-care units in the Manila area are at 84 per cent capacity, while 70 per cent of Covid-19 ward beds and 63 per cent of isolation beds were full as of April 19, government data showed.

The health minister said on Friday (April 16) more than 1,400 beds would be added in the capital area and more than 100 healthcare workers from other parts of the country brought in to help.

For Dr Encarnita Blanco-Limpin, a doctor at the Philippine Heart Centre, the help is welcome. But she said that contact tracing must be improved and more vaccines distributed to take the pressure off hospitals.

Nearly 1.3 million people have so far received at least one vaccine dose, with only three million doses arriving in the country out of the 140 million it aims to procure.

"Our emergency room is running at 200 per cent capacity," said Dr Blanco-Limpin, who was recently infected with Covid-19.

"Many of these coronavirus patients are not on beds; some of them are being treated while in sitting positions."