The US is responsible for delaying the global achievement of key climate change targets set down in the Paris Agreement, Chinese Foreign Ministry Zhao Lijian told reporters at a regular briefing in Beijing on Friday (April 16).

NDCs are the "nationally determined contributions” to the promised reduction in greenhouse gases.

The comments came before President Xi Jinping was due to meet virtually with the leaders of France and Germany on topics including climate. Xi is not scheduled to meet with Kerry and Chinese state media has downplayed his visit to Shanghai.

US President Joe Biden is trying to reestablish America as a leader on global climate action after four years of backtracking under Donald Trump, including by rejoining the Paris accord.

The White House is considering a pledge to cut US greenhouse-gas emissions by 50% or more by the end of the decade, according to people familiar with the deliberations, a target that would nearly double the country’s previous commitment and require dramatic changes in the power, transportation and other sectors.

The figure is expected to be unveiled by the Biden administration before the April 22-23 climate summit hosted by the White House. Biden has invited the leaders of 40 nations, including some of the biggest polluters and smaller, and less wealthy nations that are especially vulnerable to the changes brought by a warming planet.

Washington’s flip-flop and eventual return to the Paris Agreement is "nothing to brag about, ” Zhao said.

Actually it should be ashamed of it.”

Zhao said the US had not proposed its NDC nor had it given an explanation on how to make up for the four-year "action gap.” Washington also has not made up for the arrears it owes to the green climate fund, he said. 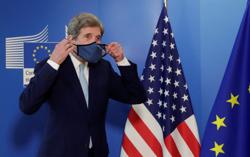