No way in: Police officers standing guard outside the Myanmar Embassy in London after it was taken over by pro-junta diplomats. — Reuters

Britain condemned “bullying” by the Myanmar junta after the country’s ambassador to London was ousted in an extraordinary diplomatic coup after calling for the release of civilian leader Aung San Suu Kyi.

Diplomats loyal to the Myanmar military authorities seized control of the embassy on Wednesday, leaving ambassador Kyaw Zwar Minn locked out in the street.

The ambassador said the defence attache had taken over the mission in “a kind of coup”, two months after the military seized power in Myanmar.

Daily protests demanding a return of democracy have rocked the country and brought a brutal response from the armed forces, with almost 600 civilians killed according to a local monitoring group.

The coup prompted several high-profile diplomatic defections, including the country’s ambassador to the United Nations.

“We condemn the bullying actions of the Myanmar military regime in London yesterday, and I pay tribute to Kyaw Zwar Minn for his courage, ” Raab wrote.

“The UK continues to call for an end to the coup and the appalling violence, and a swift restoration of democracy.”

Protesters gathered outside the mission on Wednesday evening with the ousted ambassador, who told the Daily Telegraph that “when I left the embassy, they stormed inside the embassy and took it”.

“They said they received instruction from the capital, so they are not going to let me in, ” he added, calling on the British government to intervene.

According to The Times newspaper, the ambassador said the defence attache had sought to install his former deputy as charge d’affaires.

Yesterday, anti-coup demonstrators in Myanmar fought back with hunting rifles and firebombs against a crackdown by security forces in a town in the northwest but at least 11 of the protesters were killed, domestic media reported.

Initially, six truckloads of troops were deployed to quell the protesters in the town of Taze, the Myanmar Now and Irrawaddy news outlets said.

When the protesters fought back, five more truckloads of troop reinforcements were brought in.

As part of its efforts to suppress the movement, the junta has issued a wanted notice for some 120 celebrities accused of fanning the protests by lending their support.

Yesterday, the military arrested leading actor, model and heartthrob Paing Takhon in a dawn raid at his mother’s home in Yangon.

The 24-year-old – a star in both Myanmar and neighbouring Thailand – has been active in the protest movement both in person at rallies and through his massive social media following.

International powers have voiced anger and dismay at the junta’s brutal approach, but the UN Security Council has stopped short of considering sanctions. — Agencies 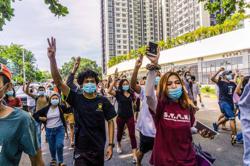