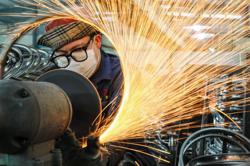 A man walks past a colour-coded sign which indicates the vaccination rate at a business is below 40%, part of a campaign to urge people to get vaccinated against the Covid-19 coronavirus, in Beijing on April 7, 2021. - AFP

The National Health Commission, in a statement, said 11 of the new cases were local infections reported in southwestern Yunnan province. Ruili city in Yunnan, which borders Myanmar, has rolled out a series of Covid-19 countermeasures including home quarantine and vaccination efforts after a new cluster emerged there last week.

The number of new asymptomatic cases, which China does not classify as confirmed cases, fell to six from eight cases a day earlier.

The total number of confirmed Covid-19 cases in mainland China now stands at 90,365, while the death toll remained unchanged at 4,636.