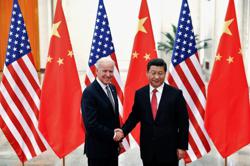 BEIJING (Bloomberg): China said it was confident the 2022 Winter Olympics in Beijing would be a success, dismissing concerns about a potential boycott from the US and its allies.

"We have confidence that we will work with all parties to ensure a successful and extraordinary Olympic grand event, ” Foreign Ministry spokesman Zhao Lijian told reporters in Beijing on Wednesday (April 7).

"Politicizing sports runs counter to the spirit of the Olympic institution, ” he added, saying a boycott would harm the interests of athletes: "The U.S. Olympic Committee and the rest of the international community will not accept that.”

In response to a question on Tuesday about whether the US is consulting with allies on a possible boycott, State Department spokesman Ned Price said "it is something that we certainly wish to discuss.”

"A coordinated approach will be not only in our interest, but also in the interest of our allies and partners, ” Price told reporters at a briefing Tuesday.

So, this is one of the issues that is on the agenda, both now and going forward. And when we have something to announce we will be sure to do that.”

A senior State Department official later said the US hasn’t discussed any joint boycott with allies and partners, and reports indicating so were incorrect.

John Katko, a Republican congressman from New York, called on President Joe Biden to push for the Games to be moved from China "to a country that embodies democracy and the spirit of the Olympic charter.”

The Biden administration has come under increasing pressure from some human rights groups and lawmakers to boycott the games over the Chinese government’s treatment of Uyghurs in the Xinjiang region -- actions that the US has said amounted to genocide.

China’s Foreign Ministry didn’t immediately comment on the US remarks. China has previously said any effort to boycott the Olympics, set to begin on Feb 4,2022, would be "doomed to failure.”

It’s not clear how much international support there would be for a boycott. Previous boycotts during the Cold War had little lasting impact on political issues of the day and the International Olympic Committee has been largely focused on getting this year’s delayed Summer Olympics in Japan on track.

But the fact that the US wouldn’t rule out a boycott is the latest signal of how far US-China ties have fallen in recent years, a victim of issues ranging from Beijing’s tightening grip over Xinjiang and Hong Kong to concerns about the security of 5G communications technology and disputed claims in the South China Sea.

US Senator Mitt Romney, who played a key role in salvaging Salt Lake City’s hosting of the 2002 Winter Olympics, has argued that the US should send its athletes to the Beijing games.

But, he wrote in a New York Times column last month, American spectators and politicians should stay home. US corporations, he added, shouldn’t send delegations of executives and clients to the quadrennial event either, he added.

"Limiting spectators, selectively shaping our respective delegations and refraining from broadcasting Chinese propaganda would prevent China from reaping many of the rewards it expects from the Olympics, ” Romney wrote.