Rail tragedy: A crane lifting the wreckage of a truck which was hit by the train a day after the deadly train derailment at a tunnel north of Hualien. — Reuters

Officials said Friday’s devastating collision was caused when a parked railway maintenance vehicle slipped down an embankment and onto the tracks.

A train packed with as many as 500 people at the start of a long holiday weekend then hit the truck just as it entered a narrow tunnel near the eastern coastal city of Hualien.

The truck driver – who railway officials said may have failed to secure the parking brake properly – has been released on bail after being interrogated by prosecutors and is barred from leaving Taiwan pending further investigation.

Rescuers described an appalling scene as they rushed into the tunnel and found the front of the train pulverised into a twisted mesh of metal.

“Car number eight had the most serious injuries and number of deaths, ” rescue worker Chang Zi-chen told reporters yesterday, referring to the most forward passenger car.

“Basically more than half of the carriage was split open and bodies were all piled up together.”

Yesterday, focus shifted to removing carriages now blocking one half of the sole train line down Taiwan’s remote and mountainous eastern coastline.

A reporter at the scene of the tragedy said the most heavily damaged carriages inside the tunnel had yet to be extracted.

Rescuers said further bodies might still be inside the wreckage.

The Interior Ministry ordered all flags to be lowered to half-mast for three days while President Tsai Ing-wen visited the wounded in Hualien’s hospitals.

Friday morning’s crash took place at the start of the Tomb Sweeping Festival, a four-day public holiday when many Taiwanese return to villages to tidy the graves of their ancestors.

More than 175 people were rushed to hospital. A French national was among the dead.

Survivors gave terrifying testimony of their ordeal inside the train after the crash.

Many of those on board were standing in the aisles because the route was so busy with those leaving the capital Taipei and heading to their home villages.

“I saw bodies and body parts all over the place, it’s really devastating, ” a man surnamed Lo told the Apple Daily newspaper.

“Humans are fragile and their lives are gone all of a sudden.”

Morgues in Hualien operated through the night preparing bodies for devastated family members.

Officials have warned that the death toll could rise because some body parts have yet to be properly identified.

Investigators are focusing on how the maintenance truck could have slipped onto the tracks.

Prosecutors had applied to a court to detain the manager on charges of causing death by negligence, a justice ministry official said.

The court said that while the truck’s fall into the path of the train was possibly due to negligence, there was “no possibility of conspiracy”. — Agencies 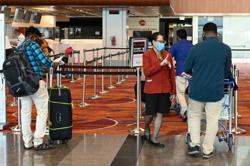