In solidarity: An ethnic Karen resident in Mae Sam Laep town, walking alongside the Salween river in Mae Hong Son province. About a dozen armed groups have condemned the junta as illegitimate and vowed to stand with the protesters.— AFP

Tracing his fingers over a “Love and Peace” tattoo inked on his forearm in a misty valley on the Thai-Myanmar border, 49-year-old former soldier Isaac said he was contemplating a return to war.

An ex-fighter with the Karenni National Progressive Party, he said he had spent years battling government forces in the eastern jungles before settling in northern Thailand.

For decades, soldiers like him have fought for greater autonomy for minorities from a central government and army dominated by majority Bamar Buddhists.

Now, with the country in turmoil since the army overthrew elected leader Aung San Suu Kyi in a Feb 1 coup, those ethnic armed groups are being drawn back into conflict with the military junta as they side with opponents of the coup, according to Reuters interviews with representatives of three such groups and the ousted civilian government.

“If all the ethnic armed groups unite, they can win, ” said Isaac.

More than 500 people have been killed by the military across Myanmar in anti-coup protests, according to a monitoring group.

About a dozen armed groups have condemned the junta as illegitimate and vowed to stand with the protesters.

In the Karen state, the Karen National Union says it is responding to appeals for help from coup opponents by sending fighters to protect protesters.

Its troops are attacking junta positions and cutting off supply routes, in what it says is a response to encroachment on its territory.

In the north, the Kachin Independence Army has staged similar attacks.

On Tuesday, three other guerrilla forces, including the powerful Arakan Army in the western Rakhine state, vowed to join what they called the “spring revolution” if killings do not stop.

Civilian lawmakers, most of whom are in hiding, have announced plans to form a “national unity government” today – with key roles for ethnic leaders – and are holding online talks about joint resistance to the military junta.

Dr Sasa, the international envoy of the civilian government’s representative body the Committee Representing Pyidaungsu Hluttaw, said an interim federal constitution had been drafted with ethnic and civil society groups and there were plans for a “federal army” to replace the military, known as the Tatmadaw. 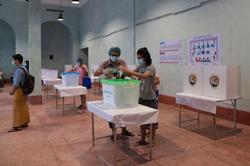