It's all clear again: Blue sky returns after Beijing hit by largest sandstorm in a decade

Picture showing Beijing skies (left) on Monday (March 15, 2021) and then the showing the situation on Tuesday morning (March 16), - Picture by CFP via Global Times

BEIJING, March 16 (Global Times): After being enveloped by sand and dust for a whole day on Monday (March 15) in the largest sandstorm in a decade, Beijing has cleared up and the yellow warning for sandstorms was lifted on Tuesday morning, with the city a picture of blue skies and sunshine.

China’s Central Meteorological Observatory continued to issue blue dust storm warnings on Tuesday morning, as cold air and strong winds brought the powerful sandstorm which started from Mongolia southward, and will continue to hit central and southern China as far as Anhui and Jiangsu provinces from Tuesday until Wednesday morning.

The Air Quality Index (AQI) rose to 500 in most provinces, indicating that they will experience severe sand pollution.

According to weather monitoring, more dusty weather is likely to hit 17 provinces in China from Friday to Saturday with the return of cold air.

A powerful sandstorm originally from Mongolia swept across much of northern China on Monday, creating the strongest and most extensive sandstorm in the country in a decade, sparking many to question why China's "Green Great Wall" did not work and why this wave of sandstorm passing from the neighboring country has such a huge impact on China.

The sandstorm hit 12 provinces in northern China from west to east as it entered Chinese territory from the southwest part of neighboring Mongolia since late Sunday afternoon with the air flow.

Chinese analysts said the role of China's Three-North Shelterbelt Forest Program (TSFP) set up in northwest, north and northeast China, known as "great green wall," is to block the drifting dust within the forestation zone. It cannot stop the desert and Gobi areas from having sand dusts. The impact of shelterbelt projects is limited if the substances of the sandstorm do not originate from the local area but from far away regions, like this one from Mongolia.

To fundamentally solve its root cause, global cooperation is needed in dealing with desertification, they said. 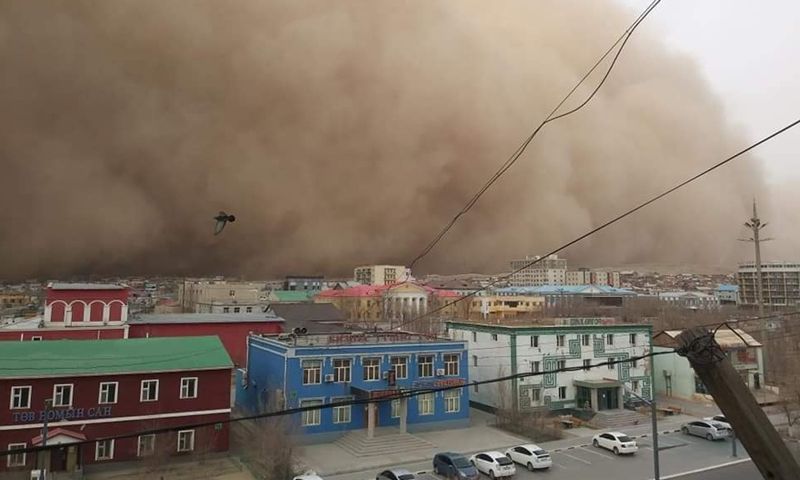 Residents in Beijing woke up Monday morning to find the entire city enveloped in yellow dust. Many said they wondered whether their eyes were blind. Skyscrapers were barely visible and the streets appeared to be covered by an old-fashioned filter.

Some optimistic netizens swarmed to social media platforms, making fun of the dust storm they haven't seen in years.

Many joked that they had an illusion that the clock was scrolled back to 2009 when Beijing had suffered from severe dust storms, and the movie Avatar was on display in cinemas (Avatar is now back with a surprise second screening in China).

The visibility in most areas of Beijing was less than 1,000 metres and bringing the PM10 close to 10,000 micrograms per cubic meter in the city center on Monday morning.

The capital issued a yellow warning for sandstorms at 7:25 am, the Beijing Meteorological Observatory said Monday, warning the public to take suitable precautions. With a yellow warning, the public are encouraged to suspend any outdoor activities and to wear protective masks.

Late on Monday, the dust storm had led to the cancellation of at least 54 flights at two airports in Beijing and 52 flights in Taiyuan, North China's Shanxi Province.

Taiyuan had also been enveloped in dust from Monday morning with visibility only at 700 meters, and the speed reached 15 meters per second.

But it was all clear on Tuesday, as the Beijing residents continues with their daily lifestyles as usual. - Global Times
Article type: metered
User Type: anonymous web
User Status:
Campaign ID: 1
Cxense type: free
User access status: 3
Join our Telegram channel to get our Evening Alerts and breaking news highlights