HANOI, March 12 (Vietnam News/ANN): Vietnam will continue to press ahead with the use of Oxford/AstraZeneca Covid-19 vaccine, a health official said on Friday, despite some negative reports of side effects of the drug.

Professor Dang Duc Anh, Director of the National Institute of Hygiene and Epidemiology and Chief of Vietnam’s National Expanded Programme on Immunisation (EPI), in charge of administering Covid-19 vaccines, made the remarks in the wake of several European countries’ recent temporary suspension of those vaccines to investigate rare blood clot complications.

Duc Anh said that since the vaccination drive launched on March 8 in Vietnam, there has not been any reports of blood clots and the vaccination efforts will continue to go on as planned while health authorities will be closely monitoring post-injection reactions.

The shots administered are among the first batch comprising 117,000 doses the country received on February 24.

Oxford/AstraZeneca vaccines are the primary product used in Vietnam’s biggest inoculation drive, with 30 million doses bought from the manufacturer by the health ministry via the authorised Vietnam Vaccine Company (VNVC), and 30 million doses to be delivered via COVAX Facility, an initiative aimed at ensuring fair and equitable access to Covid-19 vaccines for all countries.

Vietnam’s health ministry said they were in talks with Moderna, Pfizer, and Gamaleya Research Institute (developer of Russia’s Sputnik V) to add millions to its vaccine arsenal. As of Thursday (March 11), according to the EPI, 1,585 people – mostly frontline medical workers and staff – in 13 facilities of nine provinces and cities in the country (Hanoi, Ho Chih Minh City, Hai Duong, Bac Ninh, Hai Phong, Hung Yen, Bac Giang, Gia Lai, and Long An) have been given the first jab.

Only six cases reported ‘degree 2’ anaphylactic shock reactions, but all have been dealt with promptly and their health conditions have stabilised. Most report mild reactions like localised pain at the injection site, fatigue, slight fever, etc. – typical ones after any type of vaccine and didn’t last long.

Last week, before the vaccine drive commenced, the health ministry has organised a virtual training workshop for all vaccine administration sites, including training on how to deal with shock reactions.

At the workshop, Minister of Health Nguyen Thanh Long said post-injection reactions – ranging from typical to unmanageable – are entirely possible as no vaccines could be 100 per cent safe, especially in the case of Covid-19 vaccines that are being used for the first time.

He noted that different from other countries and even other vaccination drives done in Việt Nam, health authorities would conduct medical check-ups before injections are given to reduce risks, even though this precaution would lead to slower rollout speed. 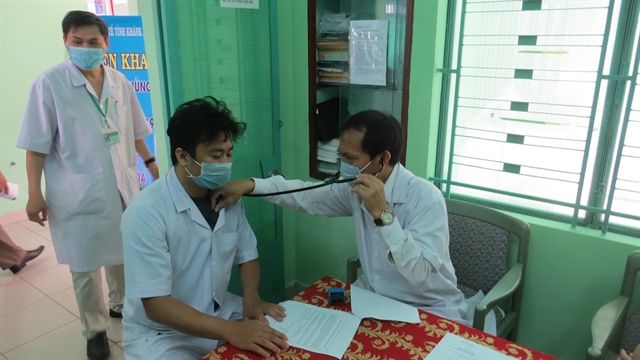 On Friday, the central provinces of Danang and Khanh Hoa have also begun administering Covid-19 vaccines for their medical staff.

Nurse Nguyen Thị Bay, at Danang Lung Hospital where many Covid-19 patients (imported cases) are still being treated, said receiving the jab made her feel “much more relieved and at ease” now that the chance of her contracting the disease and spreading it to the community had been reduced significantly.

WHO currently approved three types of Covid-19 vaccines – two versions of Oxford/AstraZeneca manufactured by Serum Institute of India and South Korean-based SKBio, along with the one by Pfizer/BioNTech.

Vietnam recorded four new imported cases of Covid-19 infection on Thursday March 11, bringing the total confirmed cases in the country to 2,533, according to the country's Ministry of Health.

All the new cases are Vietnamese citizens who recently entered the country from abroad and were quarantined upon arrival, said the ministry.

As many as 2,048 patients have been given the all-clear, the ministry said, adding that over 44,500 people are being quarantined and monitored.

The latest wave of Covid-19 infections hit Vietnam on Jan. 28, with 895 community cases so far confirmed in 13 cities and provinces. - Vietnam News/ANN