BEIJING, March 5 (Global Times): China increased its 2021 defense budget by 6.8 percent to 1.35 trillion yuan (US$209 billion) in a quicker pace than last year's growth, which analysts believe is normal, steady and restrained as the country resiliently emerges from the wreckage of Covid-19 pandemic.

The budget increase, released in a draft budget report issued at the opening of the annual session of the National People's Congress (NPC), the country's top legislature, on Friday, is slightly higher than the 6.6 percent hike in 2020 when the country and the rest of the world were still struggling to fight the unprecedent Covid-19 pandemic that upended the globe.

The increased defense budget growth rate in 2021 is normal, steady and restrained, considering China's own rightful need to develop its national defense capacity, the recovering economy after the coronavirus was contained on a domestic level, and the military threats China is facing, analysts said.

Song Zhongping, a Chinese military expert and TV commentator, told the Global Times on Friday that the slightly increased growth rate is moderate and reasonable, and the figure 6.8% is also related to the country's GDP growth.

In the Government Work Report delivered to the opening of the annual session of the NPC on Friday, the GDP growth target for 2021 is set at above 6%.

It is an objective need for China to further increase its defense budget. From the perspective of military modernization, China still uses many outdated weapons and equipment that are in need of being replaced by new ones, and the development of advanced weaponry, like the construction of the new aircraft carrier and mass-production of the J-20 stealth fighter jet, also requires investment, a Beijing-based military expert who requested anonymity told the Global Times on Friday. Intensive combat training to integrate weapons, equipment and people together as well as to get prepared in face of any military threats also needs expenditure, and non-combat military operations like the fight against the Covid-19 pandemic are also costly, analysts said.

The communiqué of the fifth plenary session of the 19th Central Committee of the Communist Party of China, held in Beijing in October 2020, made "making significant strides in the modernization of national defense and armed forces in the next five years" one of the main goals for the development of the economy and society in the 14th Five-Year Plan (2021-25), and stressed that the development of the economy should go side-by-side with the strengthening of the military.

By the 100th anniversary of the founding of the PLA in 2027, the centennial goal of military development should be achieved, and by 2035, the country should have achieved modernization of the national defense and armed forces, it was announced at the plenary session.

The successful prevention and control of Covid-19 in China over the past year has ensured that the economy continued to grow, as China became the world's only major country in 2020 that maintained positive economic growth, analysts said, noting that even back in May of that year, when the pandemic outcome was not clear to all, China still managed to plan a 6.6 percent defense budget increase, so it is natural that 2021 sees a higher figure.

Xu Guangyu, a senior adviser to the China Arms Control and Disarmament Association, told the Global Times on Friday that the US sees China as a competitor, and that is also reflected in the military field. China needs to brace itself against this pressure, and the faster defense budget growth rate will contribute to that goal.

In the past year, China has been challenged by repeated military provocations from the US, which sent many warships and warplanes for close reconnaissance of China's coastal regions and military exercises.

Some trespassed into China's territorial waters in the South China Sea, and some entered the Taiwan Straits in apparent support for Taiwan secessionists.

The US frequently sold to the island of Taiwan advanced US weapons including those attacking in nature, while the US has sent high-level officials to the island to provoke China. In the southwest, India again provocatively triggered a months-long military standoff with China, including a fatal brawl that saw casualties on both sides.

Chinese experts reached by the Global Times predicted that China will continue to face external threats, so a larger defense funding is required to ensure the Chinese military will be able to meet the challenges and safeguard national sovereignty, territorial integrity and development interests. According to the Government Work Report, in 2021, China will boost military training and preparedness across the board, make overall plans for responding to security risks in all areas and for all situations, and enhance the military's strategic capacity to protect the sovereignty, security, and development interests of our country. It will also improve the layout of defense-related science, technology, and industry, and enhance the defense mobilization system.

Despite the faster growth rate this year, China's military expenditure remains at a low level when compared with the country's status as the world's second largest economy, and also when compared with other major countries, observers noted.

China has kept its defense spending at around 1.3 percent of its GDP in recent years, which is far below the average global level of 2.6 percent, data shows.

The US, by far the world's top military spender, has spent about four times China's figure in recent years. A US defense budget proposal in February 2020 for fiscal year 2021 requested $740.5 billion for national security, $705.4 billion of which is for the US Department of Defense.

It is reasonable for China to continue to raise its defense budget to reflect its economic development, as a strong national defense is imperative to safeguarding the fruits and prospects of economic development from both traditional security threats like wars and non-traditional security threats like terrorism, natural disasters and pandemics, analysts said.

China's defense spending is line with the overall level of economic development, Zhang Yesui, spokesperson for the fourth annual session of the 13th NPC, said at a press conference on Thursday.

"Maintaining a proper and steady increase in defense spending is needed to safeguard our sovereignty and development interests, fulfill China's international responsibility and obligations, and promote the transformation of the Chinese military with Chinese characteristics," Zhang said.

Each year, the defense budget is examined and approved by the NPC as part of the overall national budget, and in 2007, China started to report to the United Nations its military expenditures, including all the basic data of the previous fiscal year, the spokesperson said.

"We have done so each year ever since," he said.

When people look at whether a country poses a military threat to others, the key is what kind of defense policy the country pursues, Zhang said.

"In China's case, we are committed to the path of peaceful development. Our defense policy is defensive in nature. The efforts to strengthen our national defense do not target or threaten any other country," Zhang reiterated. - Global Times 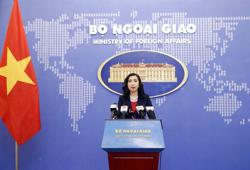