BANGKOK (Reuters): A Thai criminal court on Tuesday (March 2) approved an arrest warrant for an anti-government activist accused of burning a portrait of the country's king over the weekend.

Police said activist Chaiamorn Kaewwiboonpan was responsible for setting fire to a portrait of King Maha Vajiralongkorn in front of a prison in Bangkok on Saturday.

Chaiamorn faced charges of insulting the king under Thailand's tough lese majeste law, an offence punishable by up to 15 years in prison, arson and trespassing on government sites, police said.

Legal aid group Thai Lawyers for Human Rights said in a tweet that police had already shown up at the activist's house with a search warrant.

The incident took place a day before Thai protesters marched on a military base in Bangkok on Sunday to call for the king to give up direct command of the army unit housed there.

The youth-led protest movement rose up last year to demand the resignation of Prime Minister Prayut Chan-O-Cha, a former junta leader, and has broken taboos by calling for reform of the powerful monarchy.

Police used rubber bullets against protesters for the first time on Sunday, as well as tear gas and water cannon. 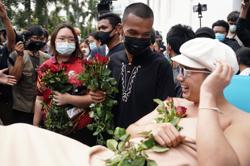