BEIJING (Reuters): China's annual session of Parliament will chart a course for economic recovery and unveil a five-year plan to fend off stagnation, as strategic rivalry with the United States spurs a shift to reliance on consumption and home-grown technology.

The National People's Congress (NPC) opens Friday (March 5), when Premier Li Keqiang will deliver the 2021 work report, which for a second consecutive year is not expected to include an explicit economic growth target, sources have said, due to the disruptions caused by the Covid-19 pandemic.

On the same day, China will also release its 14th five-year plan, a blueprint for 2021-2025 that calls for quickening reforms to unleash fresh growth drivers and make the economy more innovative.

Sources have said a goal of the plan will be to achieve economic growth averaging around 5 per cent.

China may also set electoral reforms in Hong Kong, where Beijing has been tightening its grip since imposing national security legislation last year after months of unrest in 2019.

The reforms will reinforce Beijing's ambition to have the Chinese territory run by "patriots", and would further marginalise pro-democracy candidates.

This year's NPC, which takes place in the massive Great Hall of the People facing Tiananmen Square in central Beijing, returns to its traditional March 5 start after last year's pandemic-induced delay.

"The 14th 5-year plan will give science, technology and innovation near-absolute priority," China Policy, a Beijing-based consultancy, said in a recent report.

As tensions between Beijing and Washington have risen, US bans on supplies of semiconductors to top telecoms gear maker Huawei have exposed China's reliance on imported technology.

"Beyond raising productivity, boosting consumption, revitalising the countryside and cleaning up the environment, becoming a sci-tech powerhouse is an issue of national security," China Policy said.

President Xi Jinping, whose leadership has been burnished domestically by China's recovery from Covid-19 despite criticism over its early handling of the outbreak, aims to make China a "high income" nation by 2025 and a "moderately developed" nation by 2035, when its economy is expected to double the 2020 level.

To fulfill Xi's ambition of making China a global power, the new five-year plan will have to steer the world's second-largest economy past the so-called "middle income trap" -- where countries fail to spur productivity and climb up the global value chain.

"The plan will not be limited to the 14th five-year period, it will be connected to 2035 -- how can we achieve sustainable development after bypassing 'the middle income trap," Jia said.

The London-based Centre for Economics and Business Research predicts China will leapfrog the United States as the world's biggest economy in 2028, five years earlier than previously forecast, due to the contrasting recoveries of the two countries from the pandemic.

Policymakers will scale back support for the economy this year after last year's raft of stimulus measures, but will tread warily for fear of derailing a recovery that remains uneven, as consumption lags and small firms struggle, policy insiders said.

Before the meeting, policy advisers recommended a 2021 budget deficit ranging from 3 per cent to 3.5 per cent of GDP, compared with above 3.6 per cent last year.

China's recovery has yet to attain a solid footing, the Politburo, a top decision-making body of the ruling Communist Party, said on Friday.

The economy could expand 8-9 per cent in 2021, but the recovery from a low base in 2020 would not mean China has returned to a"high-growth" period, Liu Shijin, a policy adviser to the central bank, said on Friday. 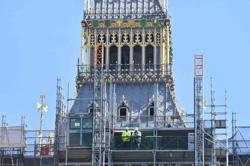