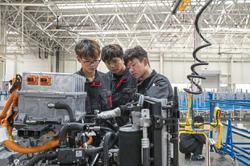 The country's gross domestic product stood at 101.6 trillion yuan ($15.67 trillion) last year, and its per capita GDP is expected to reach 72,447 yuan, up 2 percent over the previous year.

At the same time, per capita disposable income of residents increased by 2,045 yuan annually on average in nominal terms, an increase of 156 yuan than that during the 12 Five-Year Plan period. Some 55.75 million rural poor people have been lifted out of poverty, and the country saw 11.15 million people overcome poverty annually on average, according to Sheng. - China Daily/ANN