All the laws were introduced last year except the PP, which was introduced in 2019. Bima, speaking at an online discussion, began with the Job Creation Law – the most expansive of the four regulations – which requires e-commerce platforms to include either buyers’ citizen identification numbers (NIKs) or their tax identification numbers (NPWPs) in tax invoices. The previous regulation only accepted NPWPs.

The regulatory change was meant to give platforms more flexibility when reporting invoices, but Bima said it added another layer of the know-your-customer (KYC) process to online transactions.

“The omnibus law should be reevaluated, ” he said.

“We hope that we can be a part of the law’s revision process so that the regulation can be right on target.”

The government has been trying to tighten e-commerce regulations over the past year to manage the industry, whose gross merchandise value (GMV) is projected to reach US$124 billion by 2025, grabbing the majority of Southeast Asia’s projected US$309 billion internet economy GMV that year, according to a recent report.

Indonesia’s e-commerce GMV is forecast to grow 21 per cent from 2020 to 2025 to $83 billion, making it a larger market than online travel, online media, transportation and food, according to the e-Conomy SEA 2020 report by Google, Temasek Holdings and Bain & Co.

The association chairman then addressed Stamp Duty Law No. 10/2020, which requires digital stamp duties to be added to electronic documents and transactions.

Bima said the regulation lacked details on which types of documents were subject to the requirement.

He called for a one-year transition period to implement the change.

The Finance Ministry’s value-added and indirect taxation subdivision head, Bonarsius Sipayung, echoed Bima’s stance that some agreements, such as user terms and conditions, were better off exempt from the requirement.

“Digital stamp duties exist so that paper and electronic documents can be treated equally [under the law]. However, stamp duty requirements should not complicate digital transactions, ” he said during the discussion.

The PP, through the derivative Trade Ministry Regulation 50/2020, requires small and medium enterprises (SMEs) to obtain permits to sell their products on e-marketplaces.

The regulation sparked confusion among SMEs when it was first passed.

“SMEs need ease of doing business, especially when going digital. We think that it is necessary to modify that regulation, ” he said.

The PP also stipulates that e-commerce outlets must prioritise locally made products and services and provide a special section showcasing local products. This measure was in response to an influx of imported goods from online platforms, which the government believed was hurting local SMEs.

The number of imported goods sold on e-commerce platforms grew three-fold to 57.9 million in 2019, from 19.5 million in 2018, the Indonesian Employers Association (Apindo) noted last year.

IdEA countered that e-commerce transactions accounted for only 5 per cent of total imports.

“The government did not regulate the threshold for e-commerce imported goods. However, e-commerce [outlets] should not go overboard on selling imported products, ” said Trade Ministry business development director Nina Mora.

The Covid-19 pandemic has caused about 10 million new SMEs to make use of digital platforms.

The number represents about 16 per cent of the SMEs in the country.

Under the regulation, the ministry may block platforms that fail to take down what it calls “pressing” content, such as child pornography and gambling, within four hours of the initial notification. Platforms have 24 hours to take down content that “disrupts society and public order”.

Communication ministry application and information director Mariam Barata said the ministry would give three warnings before blocking platforms but that each warning would result in a Rp 500 million ($35,289) fine.

“Online platforms will need to provide a person in charge who can facilitate communication between the platform and law enforcement and give data access to law enforcement officers, ” she said.

Bima said there was a lack of assurance that the people accessing the platforms’ databases would be able to maintain accountability and provide legal certainty. The government needed to draw clear boundaries, he said, between what information officials could and could not access. - The Jakarta Post/Asia News Network 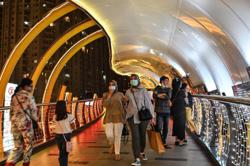