Police standing guard as they lock down a bridge to Koh Pich (Diamond Island), as motorists wait behind a barrier, in Phnom Penh on February 20, 2021, after authorities found 32 confirmed local cases of Covid-19 coronavirus in the area. - AFP

The kingdom has so far fared well in tackling the virus and life in the capital Phnom Penh has largely returned to normal.

But a group of Chinese nationals who underwent testing to obtain medical certificates for overseas travel recorded positive results on Saturday (Feb 20), sparking fears of a wider outbreak in the community.

"We have discovered a big community infection with 32 cases... this is a bad situation for us," Hun Sen said during a speech broadcast on state-run TV.

"Those found positive today are all Chinese."

The increasing presence of Chinese businesses across the kingdom has heightened anti-Chinese sentiment among some Cambodians, and Hun Sen urged people not to discriminate against Chinese nationals because of the latest outbreak. 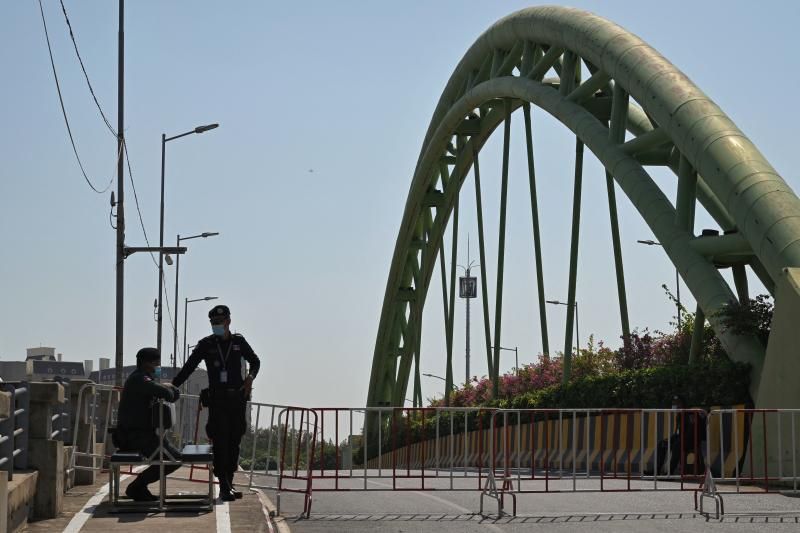 The strongman prime minister, one of the world's longest serving leaders, is a staunch ally of Beijing, and Cambodia receives billions of dollars in soft loans and investment from China.

Early in the pandemic many countries closed their borders to China, where the virus was first detected, but Hun Sen refused to follow suit and even travelled to Beijing to meet with leader Xi Jinping last February in a show of solidarity.

"Because it happened to Chinese nationals, please don't discriminate against the Chinese," Hun Sen said in his speech Saturday.

He urged residents to wear masks and practise social distancing.

The infections were sourced to a nightclub, now closed, and authorities are contact-tracing to track down any other cases, the prime minister said.

Much of Phnom Penh will remain open -- including schools.

But a small island connected to the city known as Koh Pich -- or "Diamond Island" -- is now under partial lockdown, with police blocking all road access on Saturday morning.