BANGKOK, Feb 6 (Bernama) - Thailand is implementing the "seal and bubble” strategy to curb the spread of Covid-19 in factories in Samut Sakhon, the epicentre of the latest outbreak in the kingdom.

Ministry of Foreign Affairs deputy spokesman Natapanu Nopakun said for factories providing on-site accommodation for their workers, the "seal method” would be used to prevent the workers from leaving the factory compound.

For workers staying outside the factory compound, the "bubble method” would be used to allow officials to regulate the workers’ movements between their dormitories and workplace to prevent them from wandering off to other locations.

"The ‘seal and bubble’ strategy is expected to bring local transmission under control within 28 days, ” he said at a daily Covid-19 briefing here today.

Besides that, Natapanu said Public Health officials would scale up active case detection in Samut Sakhon.

Samut Sakhon, a province south of Bangkok, has recorded 18,897 cases and 19 fatalities since it was hit by the pandemic in mid-December. 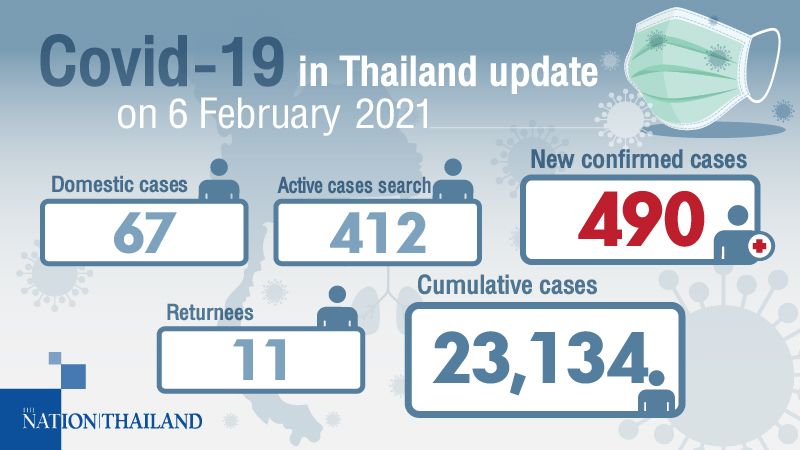 Over the last 24 hours, Thailand recorded 490 new Covid-19 cases and zero deaths, bringing the cumulative figures in the kingdom to 23,134 cases and 79 fatalities.

The Centre for Covid-19 Situation Administration (CCSA) assistant spokesman Dr Panprapa Yongtrakul said 412 of the new cases were confirmed through active case detection, with 410 in Samut Sakhon and one case each in Samut Songkhram and Samut Prakan.

She said 67 new cases were from those seeking treatment at hospitals and another 11 cases were imported, including one illegal entry.

"After the fresh wave of Covid-19 in Thailand since mid-December last year, 14 provinces are still free from Covid-19 while 47 provinces have not reported new cases for at least seven days, ” she said.

Of the new cases, 479 were domestic infections while 11 others referred to imported cases, said Dr Panprapa.

Some 410 of the domestic cases were detected via active testing among foreign migrants and Thai nationals at factories and communities in Samut Sakhon province, according to Panprapa.

Thailand has so far confirmed 23,134 cases, with more than 80 percent of the infections being detected since mid-December when the latest outbreak erupted in Samut Sakhon, about 47 km southwest of the capital Bangkok.

A total of 16,274 patients have fully recovered and been released from hospitals while 6,781 others are currently hospitalized. The total death toll remained at 79, she said.- Bernama