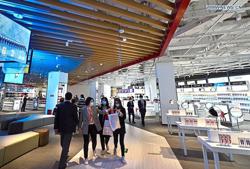 The nine shops, run by five entities, bring a pattern of differentiated competition to the duty-free market, which will be a great boost to the building of Hainan into an international tourism and consumption destination.

The Global Premium Duty Free Plaza, run by a local company, is located in a large shopping centre in downtown Haikou.

The plaza launched its first phase on Sunday, with its second and third phases due by the end of June and September this year, respectively.

The other duty-free shop, run by a company based in the southern city of Shenzhen, offers nearly 500 international brands in a shopping area of 20,000sq m.

“We will join hands with other shop operators to expand Hainan’s offshore duty-free market, attract more Chinese to spend in Hainan rather than in the overseas markets, and promote the consumption upgrading of the Hainan free trade port, ” Yang said. — Xinhua