Restless: The latest eruption of Mount Merapi near Yogyakarta. — AFP

THE country’s most active volcano erupted with a river of lava and searing gas clouds flowing 1,500m down its slopes.

It was the longest lava flow from Mount Merapi since authorities raised its danger level in Nov 2020, said head of Yogyakarta’s Volcanology and Geological Hazard Mitigation Centre Hanik Humaida.

People should stay out of the 5km danger zone around the crater as local administrations in Central Java monitor the situation, she said.

Indonesia, an archipelago of 270 million people, is prone to volcanic activity as it sits on the Pacific “Ring of Fire, ” a series of seismic fault lines around the ocean. — AP 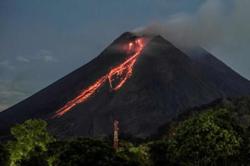