A mockup of a planet earth is displayed at the Rheinaue park during the COP23 United Nations Climate Change Conference in Bonn, Germany. - AFP

JAKARTA (The Jakarta Post/ANN): President Joko 'Jokowi' Widodo called for stronger global commitments to tackle climate change this week, but environmentalists are not buying it.

They complain that Indonesia’s emissions-reduction target has not budged and that national policies are still being pursued at the expense of the environment.

In a prerecorded statement aired at the 2021 Climate Adaptation Summit (CAS) hosted by the Netherlands on Tuesday (Jan 26), Jokowi said that the impacts of climate change were “very real” for archipelagic nations like Indonesia.

From fisherfolk and farmers whose livelihoods are affected by climate change, to coastal residents and small island dwellers who faced rising sea levels on their own doorstep, Indonesians have had to adapt to climate change, he said.

In order to respond adequately, the President said that all nations must take “extraordinary steps” to combat climate change, including by fulfilling their respective nationally determined contributions (NDCs) for emissions reduction.

“Indonesia has also updated its NDCs to increase our [climate] resilience and adaptation capacity, ” he said.

NDCs underpin efforts under the Paris Agreement to cut greenhouse gas emissions and hold global warming to well below 2° Celsius for this century. But the end of 2020 marked a moment, under the landmark 2015 accord’s “ratchet mechanism”, when nations were supposed to submit more ambitious commitments for cutting their share of emissions.

Every party that signed up to the Paris Agreement has to submit increasingly ambitious NDCs every five years. Indonesia submitted its first NDCs on Nov 6,2016.

At the time, it pledged to keep emissions below 29 per cent by 2030, or up to 41 per cent with international assistance.

Officials began updating the NDCs last year, but one draft seen by The Jakarta Post in mid-2020 maintains the same emissions-reduction target.

As of Wednesday, only eight countries had submitted their second NDCs to the United Nations Framework Convention on Climate Change (UNFCCC).

Indonesia was not among them, but the Environment and Forestry Ministry’s director general for climate change management, Ruandha Sugardiman, said that technical documents for the updated NDCs were largely complete.

“We are currently compiling inputs from various parties, after which the President – via the State Secretariat – will send the updated NDCs before the end of March, ” he said.

At the summit, Jokowi called for the strengthening of global partnerships to combat climate change. He said Indonesia was in the midst of fostering cooperation with Pacific island nations, who are similarly vulnerable.

“Developed countries must also fulfill their climate commitments, ” he said.

The Paris Agreement requires its signatories to implement adaptation measures through national planning, but also through funding to at-risk countries.

Indonesia has already benefited from Norway through this arrangement, but much more needs to be done globally. The UN Environment Program’s Adaptation Gap report found that the current finance levels of around US$30 billion annually for adaptation fell far short of the annual cost in developing nations of $70 billion, AFP reports.

It said the true cost of adapting to climate impacts in these nations could be as high as US$300 billion every year by the end of the decade and $500 billion by mid-century.

However, while Jokowi’s call to action demanded others boost their commitment, environmentalists say that Indonesia has failed to step up its own game.

Indonesian Forum for the Environment (Walhi) campaigner Yuyun Harmono said that although it was true that developed countries should be more ambitious in their emissions-reduction plans, it did mean Indonesia could simply point the finger at others.

“If we want to exercise climate diplomacy, we should also show our seriousness [in combating climate change], ” Yuyun told the Post.

He noted, for instance, that Indonesia’s NDC target had yet to be fully integrated into national policy, and that, on the contrary, some policies risk increasing emissions.

“National policies such as the revised Mining Law and the Omnibus Law on Job Creation do not reflect our [climate] commitments, ” Yuyun said.

Both pieces of legislation, signed last year, sparked protests among activists, alleging that the state was trying to attract investment at the expense of the environment.

Meanwhile, Madani Foundation chairman Teguh Surya said that it might still be okay for the government not to increase the emissions-reduction target in the updated NDCs, but only if it was followed up with clear and precise steps to achieve them in the first place.

“The problem is that the commitment to reduce 29 per cent of emissions by 2030 could potentially fail because of the omnibus law and its implementing regulations, ” he said.

Teguh noted that the current regime had also supported the clearing of critical forest cover for its food-estate plan, part of the national economic recovery program (PEN) that is being employed in the pandemic response.

According to data compiled by Madani, at least 1.5 million hectares of natural forest cover is being targeted for use under the food-estate programme, which covers a total of 3.6 million ha of land in South Sumatra, North Sumatra, Central Kalimantan and Papua.

Based on early snippets from Indonesia’s draft NDC update, the forestry sector is subject to the largest reduction in greenhouse gases at 17.2 per cent, followed by the energy sector at 11 per cent and the industry, waste and agriculture sectors at a combined 0.8 per cent.

The government previously allocated up to Rp 4.54 trillion ($322.3 million) for the food-estate plan and environmental programmes from the PEN budget.

“We shouldn’t raise our hopes too high that the Indonesian government will increase its commitment [when] keeping to the previous one has been hard enough, ” he said. 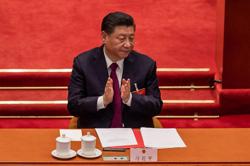