The 13th National Party Congress, which will pick candidates for the country's new leadership and set out the long-term development course, officially opened in Hanoi on Tuesday morning. — VNA/VNS

A total of 1,587 delegates representing more than 5.1 million Party members attend the event which lasts until Feb 2.

Foreign ambassadors and country representatives of international organisations in Vietnam were also present.

“The Congress takes place in the context of the country facing many opportunities and challenges and a lot of new strategic problems that need to be resolved, ” he said.

The PM emphasised that challenges including climate change, natural disasters, epidemics and spectacular achievements of scientific and technological advances were affecting the socio-economic life of our country as well as the whole world.

The Prime Minister said the 13th congress is a congress of “Solidarity-Democracy-Discipline-Innovation-Development”, reflecting the strong will and resolution of the nation as a whole to build Vietnam into a strong country with prosperous people, democratic, fair and civilised country. 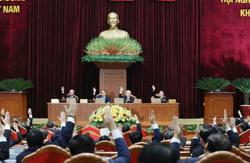