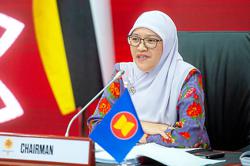 Permanent Secretary (Economy) at the Ministry of Finance and Economy Dr Hajah May Fa’ezah Ahmad Ariffin chaired the meeting.

Senior economic officials from the 10 Asean member states (AMS) and representatives from the Asean Secretariat based in Jakarta, Indonesia attended the meeting virtually.

The three-day meeting will be in session until Wednesday. Among the main agenda to be discussed during the meeting are Brunei Darussalam’s 10 proposed Priority Economic Deliverables (PEDs), the 2021 Annual Priorities and review progress reports of sectoral bodies under the SEOM’s purview.