Eateries gear up to abide by new CNY Covid-19 measures 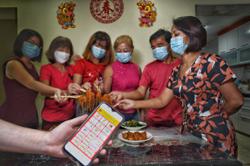 Tossing for prosperity: Some caterers said they were concerned about the extended impact on their businesses. — The Straits Times/ANN

RESTAURANTS in Singapore are gearing up to fall in line with the latest Covid-19 restrictions for the upcoming Chinese New Year period – with ideas that include the playing of pre-recorded messages while tossing yusheng or during lohei, in view of diners being told to avoid the usual shouting of auspicious phrases.

While eating establishments do not foresee dine-in plans or reservations being greatly affected, some caterers said they were concerned about the extended impact on their businesses. Some are appealing to the government for assistance.

Those who rely on larger orders – such as buffets – will be directly hit by new measures announced on Friday, such as a limit of eight visitors per household per day from Jan 26.

The health ministry has also advised individuals to visit only family and at most two other households a day. And companies have been asked to not organise gatherings and social activities around Chinese New Year, which starts on Feb 12.

Andrew Tjioe, president and chief executive of the Tung Lok Group, said that while he expected to see cancellations for corporate gatherings across his 14 restaurant brands in Singapore, bookings and delivery orders were still streaming in from families.

Prior to Friday’s announcement, Tung Lok had already planned for – and implemented – more muted forms of lohei revelry, said Tjioe.

“We’ve had some early celebrations and we practised having the waitstaff serve the yusheng with simple phrases – we basically minimised the talking, ” he explained.

Khor Boon Foong, 36, senior supervisor at Tung Lok Seafood in Paya Lebar Quarter, said her staff would be on the lookout to ensure customers keep their voices down and that the requisite 1m distance between tables is maintained.

At the Qian Xi Restaurant, also in Paya Lebar, manager Sharon Chan said they would use a projector and LED screens to display notices reminding customers of the regulations.

“I think most customers are understanding about the regulations because, ” added the 41-year-old.

Aside from signage, Francis Ng, chief executive of the House of Seafood restaurant at Punggol, said he would employ more staff to help enforce measures, and play pre-recorded lohei-tossing messages while serving the dish to customers.

He said his restaurant was almost fully booked for the Chinese New Year stretch, and was hopeful for no last-minute cancellations.

“On the first day we’re usually closed, but this year we will open so customers can come by throughout – and we can spread out the flow so it won’t be so packed, ” added Ng. “I don’t want a second lockdown and to suffer again.” — The Straits Times/ANN