Residents look down from a building in a targeted lockdown area in Jordan, Hong Kong, on Saturday (Jan 23, 2021). - AP

HONG KONG, Jan. 24 (China Daily HK/Xinhua): Hong Kong's total Covid-19 cases surpassed 10,000 on Saturday as the region is still grappling with a resurgence of the virus spread, which marked the fourth wave of the epidemic since the first case was reported a year ago.

The first two cases were discovered in Hong Kong on January 23, 2020. One year on, the Hong Kong Special Administrative Region (HKSAR) government has contained three waves of the outbreak.

Over the period, 8,997 patients were cured and discharged, and 164 died of the virus at public hospitals.

In the face of the epidemic, the government took action swiftly and rolled out an array of stringent and scientific control policies. Health workers conduct testing in the Jordan area of Hong Kong on January 23, 2021, after thousands were ordered to stay in their homes for the city's first coronavirus lockdown as authorities battle an outbreak in one of its poorest and most densely packed districts. - AFP

Visitors have to undergo quarantine and virus tests and those from high-risk countries and regions face stricter policies. Social distancing was adopted to prevent the virus spread in communities, including the mask mandate, closure of entertainment venues and the ban on group gatherings.

As invisible transmission chains were found, public health authorities stepped up the testing of Covid-19 patients, with targeted measures for vulnerable groups from cab drivers to nursing home workers.

Since November last year, over 4,000 patients have been identified through about 2.3 million tests.

The government announced Saturday for the first time that a virus-stricken area in the Kowloon Peninsula will be sealed for two days, where all the people will be required to take compulsory tests and stay at home until test results are mostly ascertained.

As the resurgence of Covid-19 cases and following control policies dealt a major blow to the economy and people's lives, the government set up an anti-epidemic fund last February to subsidize businesses and residents hardest-hit amid the epidemic.

So far, more than 6.8 million people and nearly 780,000 businesses have benefited from altogether some 120 items of policies worth 160 billion Hong Kong dollars (US$20.64 billion) under the fund.

Taking into account other measures, the government has carried out 310 billion Hong Kong dollars of relief packages, equivalent to 11 per cent of GDP. 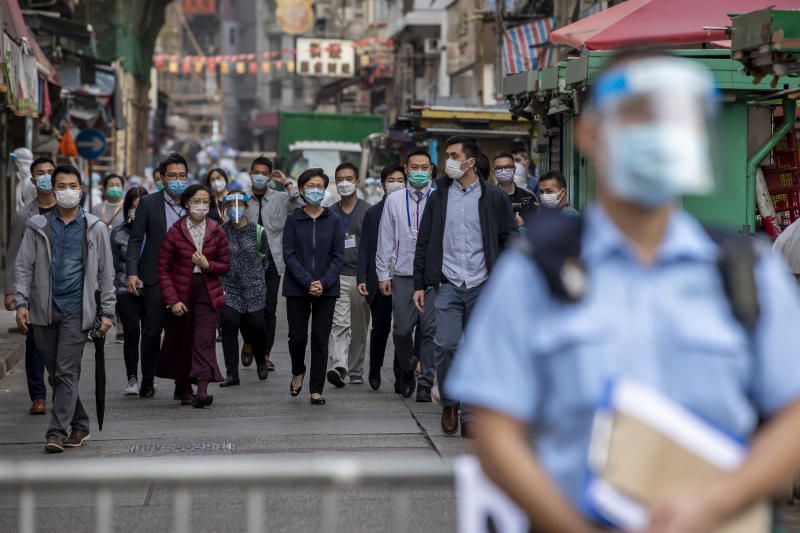 Carrie Lam, Hong Kong's chief executive (centre), walks in an area under lockdown in the Jordan area of Hong Kong, China, on Saturday. Hong Kong is locking down thousands of residents for the first time over the weekend in a bid to contain a worsening outbreak of the coronavirus. - Bloomberg

Over the past year, the central government has offered great support for Hong Kong's battle against Covid-19.

Sufficient daily necessities and medical materials have been guaranteed for Hong Kong since the first wave of the epidemic, and many Hong Kong residents stranded in the Chinese mainland and overseas have returned home safely with the help of the central government.

Last summer, over 570 mainland medical professionals were sent to Hong Kong for a mass screening program, under which 1.78 million residents got tested within two weeks. A treatment facility at AsiaWorld-Expo, which was built with the central assistance, added more than 1,000 beds to Hong Kong's overstretched medical system.

Earlier this week, the construction of a temporary hospital funded by the central government was completed, providing 816 negative pressure beds.

Hong Kong will also be prioritised in mainland vaccine supply and a certain amount of doses will be specially allocated for Hong Kong residents when necessary.

"The resources, nucleic acid tests and vaccines as well as the temporary hospital completed today, have all demonstrated the central government's care for the HKSAR," HKSAR Chief Executive Carrie Lam said, adding that it is proven that the central government is forever the strongest backbone of Hong Kong's anti-epidemic work.

After a challenging year, Hong Kong has seen a glimmer of light at the end of the tunnel as vaccines are in the pipeline.