JAKARTA, Jan 23 (Jakarta Post/ANN): For the first time in years, Jakarta is not on the list of the most congested cities around the globe as a recent report mentions that the city shows improvements in untangling the traffic jams.

The city ranked 10th in the 2019 report. The index shows that the average congestion level in Jakarta was 36 per cent in 2020, down from 53 per cent in the previous year.

According to the ministry, 9,912 more people were discharged from hospitals, bringing the total number of recovered patients to 791,059. The virus has spread to all the country's 34 provinces. The Jakarta Transportation Agency head Syafrin Liputo was quick to present the result as an achievement of the city administration’s efforts to tackle congestion.

He claimed that the provincial administration had taken several measures to solve the traffic problem, including the integration of public transportation systems through the JakLingko programme.

But TomTom’s data suggest that Covid-19 restrictions played a bigger role in reducing traffic in the capital.

According to TomTom, the congestion level dropped significantly around mid-March, shortly after health authorities confirmed the first Covid-19 cases in Jakarta.

At that time, the city administration and authorities had started to encourage people to work and study from home in order to reduce the risk of coronavirus transmission in the capital.

The least congested month for Jakarta in 2020 was April, coinciding with the first phase of large-scale social restrictions (PSBB) imposed by the authorities.

Governor Anies Baswedan said the move to ease the restrictions was necessary as the capital was suffering from an economic downturn. Syafrin said the strict mobility restrictions due to the pandemic had also helped to reduce congestion. Nirwono Joga, an urban development expert at Jakarta’s Trisakti University, said the administration still had tons of work to do to solve the traffic problem despite the increased rank in the annual index.

“People cannot travel due to the limited use of public and private transportation; thus, reducing traffic. There’s nothing special about this success,” Nirwono said.

Instead, he urged the Jakarta administration to use this opportunity for replanning mobility systems so that the city would avoid a relapse in terms of traffic congestion.

For example, the city could rebuild populated kampungs and buildings into a liveable integrated areas with public facilities within walking or cycling distance.

“Another method is to apply an education zoning system and build adequate pedestrian areas and bicycle lanes, so that students can simply walk or cycle to school,” Nirwono went on to say.

During the Covid-19 pandemic, many Jakartans have shifted from personal motorized vehicles to bicycles.

A global NGO that promotes sustainable transportation, the Institute for Transportation Development Policy (ITDP), recorded a tenfold increase in the number of cyclists along Jl. Sudirman in Central Jakarta during a morning rush hour in 2020 compared to the same period in the previous year. - The Jakarta Post/Asian News Network 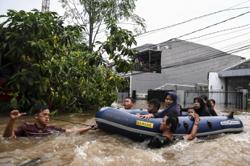