A family member of the passenger of Sriwijaya Air flight SJ 182, which crashed into the sea, mourns while visiting the site of the crash to pay their tribute, on the deck of Indonesia's Naval ship KRI Semarang, at the sea off the Jakarta coast, Indonesia, on January 22, 2021. - Reuters

JAKARTA, Jan 23 (AFP): Relatives of 62 people killed when an Indonesian passenger jet slammed into the sea scattered flowers at the crash site on Friday evening (Jan 23), as investigators look for clues to why the plane dropped from the sky minutes after takeoff.

The memorial came as the search for human remains and wreckage ended two weeks after the Sriwijaya Air Boeing 737-500 plunged roughly 10,000 feet (3,000 metres) in less than a minute before crashing into waters off Jakarta.

However, the hunt continues for a still-missing cockpit voice recorder, as investigators pore over details from a retrieved flight data recorder -- so-called black boxes that could be critical to the probe.

Maintenance logs pointed to an issue with the plane's autothrottle, which controls engine power, authorities said, but it was not clear what role -- if any -- the apparent malfunction played.

On Friday, dozens of relatives tossed red petals from the deck of a navy ship, some overcome with emotion.

"When I cast the flowers I could see my sister's face on the surface of the water," said Heri Purnomo, whose older sibling Agus Minardi and her husband were on the flight.

Jefferson Irwin Jauwena, the airline's president director, said he was "devastated" by the accident which claimed 12 crew lives.

"We also feel sad and lost," he said.

So far, 47 of the 62 victims have been identified through fingerprints and DNA matches to living family.

But Bety Saprianti, 33, who lost five relatives, is waiting for her aunt to be officially identified.

"We did not attend the ceremony today. None of our family joined -- it was too painful," she said.

"Our only hope now is (the last) of our relatives is identified soon."

The 26-year-old plane crashed just four minutes after setting off from Jakarta, bound for Pontianak city on Borneo island, a 90-minute flight away.

Authorities said the crew did not declare an emergency or report technical problems with the aircraft before its dive, and that it was probably intact when it hit the water -- citing a relatively small area where the wreckage was scattered. 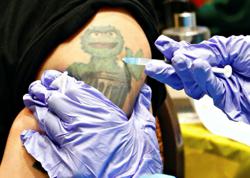