“The Thai government plans to issue documents to undocumented Myanmar workers who have no permanent residency in Thailand. But the price is very high. We urge the Thai authorities to reduce the cost, ” said Ye Min.

Thai authorities placed a lockdown again in Mahachai on Jan 4 as there has been a renewed outbreak of Covid-19.

In order to control the spread of Covid-19 virus in Samut Sakhon Province which is the first Covid-19 outbreak area, Thai authorities had carried out travel restrictions for foreign workers since the beginning of Dec 21.

The Thai Health Department announced that over 1,700 Myanmar migrant workers in Mahachai are infected with the virus.

Due to the second wave of Covid-19, there were over 1,900 Covid-19 confirmed cases in Samut Sakhon Province, Thailand, as of Jan 3.

Among 1,900 confirmed cases, over 1,700 infected patients are Myanmar migrant workers.

Most of the people living in Mahachai are Myanmar migrant workers and only 10 per cent of the population are Thai citizens. - Eleven Media Group/Asia NewsNetwork 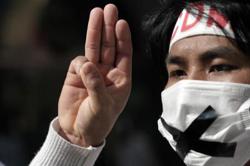