The South Jakarta District Court has rejected a pretrial motion filed by the leader of the now-defunct Islam Defenders Front (FPI), Rizieq Shihab pertaining to the termination of an investigation into the firebrand cleric’s alleged health protocol violations.

The sole judge Akhmad Sayuti rejected all motions filed by Rizieq, concluding that the Jakarta Police had followed proper procedures in questioning and arresting him.

“(The court) rejects all pretrial motions filed by the plaintiff, ” Akhmad said on Tuesday as quoted by tempo.co.

Police named Rizieq a suspect in mid-December for allegedly breaching Covid-19 restrictions by hosting several large gatherings in November, including the wedding of his daughter in Central Jakarta.

Most recently, the police also charged him for refusing to undergo a Covid-19 test when he was admitted to Ummi Hospital in Bogor, West Java, for what Rizieq’s side claimed was exhaustion.

Rizieq’s lawyer Alamsyah Hanafiah said he would consider filing a judicial review petition with the Constitutional Court to challenge the authority of sole judges in presiding over pretrial hearings in criminal cases if they lost the pretrial motion.

“We want to file a petition challenging the Criminal Law Procedures Code’s provisions on sole judges, ” Alamsyah said as quoted by kompas.com.

The government has been at loggerheads with the FPI since Rizieq’s return from self-exile in Saudi Arabia in November.

The feud has resulted in several incidents, most notably the shooting of six FPI members by the police and the arrest of Rizieq.

The government later moved to ban the hardline group. — The Jakarta Post/ANN 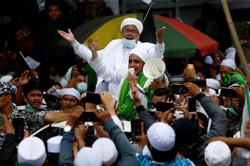