US and China must find common ground in spite of competition: Singapore DPM He also called on Asean members to stand together in the face of pressure from great-power competition, in order to advance the region's collective interests.

"It is not a question of choosing sides, but rather, retaining our ability to make choices for ourselves," Heng said at The Straits Times Global Outlook Forum.

He was the keynote speaker at the annual event, which focuses on the economic and political situation around the world, and is held online this year. It is organised by The Straits Times in partnership with presenting sponsor OCBC Premier Banking.

In his speech, Heng said the world must be prepared for sharper competition between the US and China, given a fundamental shift in attitudes in America and elsewhere.

China is now regarded by some as a strategic competitor, he noted, adding that there is now bipartisan support for a tougher stance on China in the US.

The incoming administration of President Joe Biden will be taking office next week, but may not reverse some of the moves that the administration under Donald Trump has put in place, he said.

Strategic rivalry will colour the relationship for a long time to come, and there will be disagreement and friction. But both the US and China can still reach a more measured tone of engagement, and greater predictability in decision making, he added.

Conflict is not inevitable, he said, noting that competition and cooperation can co-exist.

Heng pointed to how even during the Cold War, a minimum level of practical cooperation existed between the US and the Soviet Union.

Both worked together through the World Health Organisation to eradicate smallpox in the 1960s, and in the contested area of space, the 1975 Apollo-Soyuz mission developed compatible rendezvous and docking systems that remained in use for decades.

"The key is that both sides must take a rational view and find common ground, to compete when necessary, and cooperate wherever possible."

The current global order did not come about naturally, he noted, saying it was created through strong leadership and purposeful decisions.

In the case of the US and China, Heng said: "It is in the interest of both to remain engaged with each other, and with the global system."

"There are challenges that the US will not be able to manage alone. China has been a major beneficiary of the global system since it undertook reforms and its entry into the World Trade Organisation two decades ago."

At present, there are early signs that both countries could be willing to seek common ground on global issues such as climate change and public health, Heng added. "Much will depend on whether they are able to find a framework for cooperation."

Moving to the topic of Asia, Mr Heng noted that the continent's share of global gross domestic product has been growing steadily.

It is projected to recover faster than the rest of the world, and will contribute 60 per cent of global growth by 2030.

But an "Asian century" is not inevitable and economic recovery will be uneven across countries, with US-China competition possibly impacting growth.

"To secure the region's potential and address risks, leaders need to work together to take action," he said.

In Asean, the active presence of both the US and China are important for the region to progress, Heng added.

The American presence underpins regional stability, which creates a hospitable environment for business and investments. Meanwhile, China has deep economic interdependence with Asean, and is the largest trading partner for eight Asean countries.

But the region will continue to feel the tug of US-China competition, Heng said.

"We cannot determine the trajectory of this contest, but we can stand together to advance Asean's collective interests," he added. "And Asean's interests must be defined by Asean, not by others who seek to define them for us."

In order to safeguard regional independence and agency, the region must remain anchored on Asean centrality, he said. 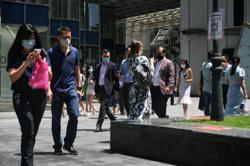