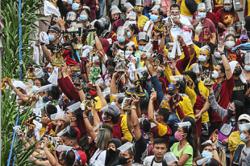 A man sprinkles holy water among Catholic devotees attending a mass on the feast day of the Black Nazarene, outside Quiapo Church in Manila, Philippines, on Jan 9, 2021. - Reuters

MANILA, Jan. 10 (Philippines Daily Inquirer/ANN): The Department of Health (DOH) on Sunday pleaded with the multitude who descended on Quiapo Church and its vicinity for the annual Feast of the Black Nazarene on Saturday (Jan 9) to go into self-quarantine and closely watch for any symptoms of Covid-19.

The Department of Health (DOH) of the Philippines on Sunday reported 1,906 new confirmed COVID-19 cases, bringing the total number in the country to 487,690.

The death toll climbed to 9,405 after eight more patients died from the viral disease, the DOH said. It added 8,592 more patients had recovered, raising the total number of recoveries to 458,198.

The Philippines, which has about 110 million population, has tested over 6.59 million people since the disease emerged in January last year.

To prevent a superspreader event, officials cancelled the Jan 9 “traslacion,” a procession which draws hundreds of thousands of barefoot devotees who follow the image of the centuries-old statue of Jesus Christ carrying a cross on a float being pulled by rope for more than 20 hours through central Manila’s major streets from Rizal Park to Quiapo Church.

In a statement, the DOH advised those who took part in the annual veneration of the Black Nazarene “to minimise interactions, especially with the vulnerable members of their households, and to conduct active self-monitoring for any symptoms.” In lieu of the procession, Church authorities scheduled 15 Masses starting before dawn on Saturday, but with only 400 people allowed inside the church each time. Thousands outside followed the rites that were shown live on 12 large television screens around the church.

But by noon on Saturday, at least 400,000 devotees had been to the church and its vicinity since Friday night, according to the Manila police chief, Brig. Gen. Leo Francisco.

The religious event attracted the biggest crowds in Metro Manila since the start of the COVID-19 pandemic last year. The city government of Manila reported that 2.3 million devotees joined last year’s traslacion.

The police reported crowds in the vicinity of nearby San Sebastian Church, Santa Cruz Church and Nazarene Catholic School. Several thousands of officers were deployed to ensure social distancing in the devout crowd.

This year, Manila’s Public Employment Service Office had set up booths around Quiapo to distribute masks to devotees for free. Devotees were also asked to fill out contact tracing forms at various checkpoints around Quiapo Church, but some submitted theirs online.

The DOH said devotees who went to Quiapo and later showed symptoms of COVID-19 must immediately inform their Barangay Health Emergency Response Teams “for appropriate management and referral.”

It also urged local governments, especially in the National Capital Region, to coordinate with Quiapo Church to secure a list of devotees who went to Quiapo, and to actively monitor their constituents who participated in the event for early detection.

“We’re really going to need a miracle to stop a superspreader event in Quiapo right now,” Dr. Edsel Salvana, a member of the technical advisory group of the DOH, said in a tweet before noon on Saturday. - Philippine Daily Inquirer/Asian News Network 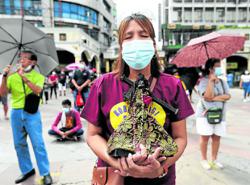