A member of the rescue team looking for an Indonesian plane that lost contact after taking off from the capital Jakarta holds suspected debris, at sea, Saturday (Jan 9, 2021), in this picture obtained from social media. - Reuters

JAKARTA, Jan 9 (AFP/Bloomberg): An Indonesian budget airline jet suspected to have crashed into the sea just minutes after take-off from Jakarta had 62 passengers and crew on board, including 10 children, the transport minister said Saturday.

"The total number of passengers was 50 along with 12 crew," Budi Karya Sumadi told reporters, adding that the figure included seven children and three infants.

The Sriwijaya Air Boeing 737 lost contact with air traffic control about four minutes after take-off on its way to Borneo island.

Indonesian authorities are searching for a 26-year-old Boeing Co. jet with 62 people aboard that has been missing for several hours after taking off from the capital Jakarta, pushing the nation’s aviation industry into crisis mode once again.

The South-East Asian nation’s search agency has picked up some debris and is trying to confirm if it belongs to the Sriwijaya Air Flight SJ182, the organization’s deputy for operations, Bambang Suryo Aji, said at a press briefing Saturday evening. The flight departed Jakarta for a 90-minute trip to Pontianak on the island of Borneo and lost radio contact. FlightRadar24, a website that monitors aircraft movements, tracked the plane plunging from 10,900 feet to 250 feet. The jet is a 737-500 model that’s much older than the Max 737 aircraft that was grounded globally for about two years in 2019 after two fatal crashes. Indonesia has had to deal with a spate of plane crashes in the past decade, including a Lion Air disaster that killed 189 people in 2018 and prompted global outrage against Boeing’s newer 737 Max jet.

In December 2014, an AirAsia Group Bhd. plane plunged into the Java Sea with 162 people on board. Weather has been a contributing factor in several of those crashes. It was raining heavily in Jakarta on Saturday.

The disaster comes as the aviation industry is reeling from the effects of the coronavirus pandemic, which brought air travel to its knees. Covid-19 tore through in a tumultuous, unprecedented way -- leaving carriers in a deep hole, along with a constellation of aerospace manufacturers, airports and leasing firms. The International Air Transport Association said last week that global passenger demand dropped significantly during November, down 70.3% versus the same period of 2019 when measured in revenue passenger kilometers.

Indonesian authorities said they have sent several search vessels from Jakarta to the plane’s last known location in the Java Sea, believed to be only around 25 meters deep, and are preparing to search for the aircraft’s black box. First responders were also deployed to the site to aid potential survivors, local TV reported. Of the 62 people, 56 were passengers, including seven children and three infants, and there were two pilots and four cabin crew, local media reported.

"We are aware of media reports from Jakarta, and are closely monitoring the situation,” Boeing spokeswoman Zoe Leong said in a statement. "We are working to gather more information.” Sriwijaya Air said it’s working to obtain more detailed information about the flight, and will release an official statement later. 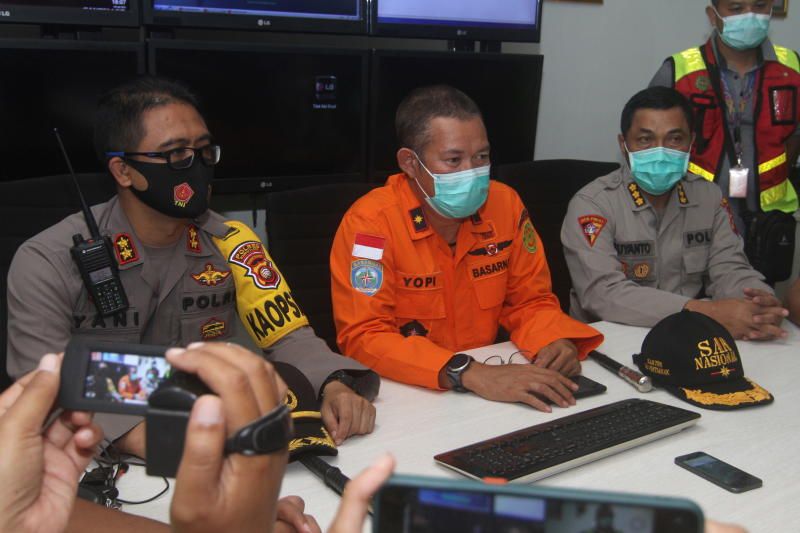 Head of Pontianak Basarnas, Yopi, gives a speech during a conference after Sriwijaya Air Flight SJ182 with more than 50 people on board, lost contact after taking off, according to local media at Supadio Airport, Kubu Raya, West Kalimantan Province, Indonesia, on Saturday (Jan 9, 2021). - Antara Foto/Reuters

Fishermen in the Thousand Islands regency found debris and an oil spill in the water, with no confirmation of whether they’re from the missing plane, according to video shown by local news channel MetroTV. The regent of Thousand Islands received a report of a plane crashing on Laki Island, which is uninhabited, on Saturday afternoon, he said to local news website Detik.com.

Indonesia has a dire safety record when it comes to air accidents. Its poor aviation history saw carriers from the nation banned from the European Union in 2007 and it was only in June 2018 that the full ban was lifted. In 1997, Garuda Indonesia Flight 152 crashed approaching an airport in Medan in North Sumatra, killing 234. The AirAsia Flight 8501 that crashed in late 2014 was en route to Singapore from Surabaya.

On Oct. 29, 2018, a Boeing 737 Max crashed into the Java Sea 13 minutes after takeoff, killing all 189 passengers and crew. That was Indonesia’s second-deadliest aircraft accident behind Garuda Flight 152.

Sriwijaya Air was established in November 2003. Its fleet is comprised of the Boeing 737 family of jets and ATR 72-600 turboprops. While the company primarily serves domestic routes it does fly internationally to Penang, Malaysia and Dili, Timor Leste. Flag carrier PT Garuda Indonesia briefly took over the operation of Sriwijaya and its unit NAM Air back in 2018 to expedite Sriwijaya’s debt restructuring, including clearance of dues to Garuda’s unit.