China to help Laos get access to Covid-19 vaccine China is a participant in the Covax programme – a global initiative working for global equitable access to Covid-19 vaccines.

Chinese support will include financial assistance, the ambassador told Lao and Chinese reporters in an online press conference.

Jiang gave an interview as Laos and China joined the world in welcoming 2021 – the year that will see the 60th anniversary of diplomatic ties between Laos and China.

China remains committed to continue working with Laos to fight the pandemic amid the rising number of infections and deaths in many countries.

“We are pleased to continue cooperating with Laos through bilateral channels to ensure the safety of the lives and health of our two peoples, ” Jiang said in Chinese, which was transcribed later.

“We acknowledge the urgent need for (Covid-19) vaccines by the Lao side.”

China is one of several countries that are in the process of developing Covid-19 vaccines.

The vaccine developed by Sinopharm China National Pharmaceutical Group Co Ltd can induce neutralising antibodies in 99.52% of recipients and has a 79.34% efficacy rate, according to midterm clinical results, the China Daily reported on Wednesday.

Several pharmaceutical research groups have already claimed success in developing a Covid-19 vaccine and some countries are now carrying out vaccinations.

This comes after the European Medicines Agency and the European Commission authorised the German-US Pfizer-BioNTech vaccine, according to the BBC.

The UK and the US are also vaccinating their citizens.

Prime Minister Thongloun Sisoulith recently told Lao authorities to prepare to receive the vaccines and to be ready for the rollout of vaccinations in the general population.

Vaccinations are expected to begin in April with 20% of the population likely to be immunised initially, Deputy Minister of Health Dr Phouthone Muongpak said.

At-risk groups including front line officials will be given priority. — Vientiane Times/ANN 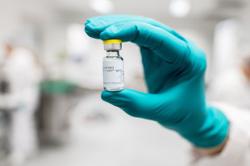