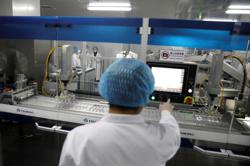 JAKARTA (The Straits Times/ANN): With its own phase three clinical trial of a Covid-19 vaccine candidate in limbo, Indonesia said it has asked for data from Brazil, where a similar trial is progressing smoothly.

It expects to receive the safety and efficacy data on Chinese firm Sinovac Biotech's CoronaVac by Dec 28, and hopes to finally start rolling out its vaccination programme in January.

The phase three clinical trial is the final stage that a vaccine candidate must clear before it is given the go-ahead for use by the regulatory agency in a corresponding country.

BPOM, the Indonesian equivalent to US Food and Drug Administration, has requested the data through its Foreign Affairs Ministry, which then communicated with Brazil's National Health Surveillance Agency and Sinovac, said a government official, who spoke on condition of anonymity.

"Within a matter of days after receiving the data, BPOM may issue its emergency use authorisation on the vaccine, when a thorough evaluation is done," the official told The Straits Times.

Brazil carried out a strict clinical trial on Sinovac's CoronaVac and started the trial earlier than Indonesia, the official added.

Dr Penny K. Lukito, BPOM's head, has said that it is always ready to accommodate the choice of a vaccine so long as it has gone through the proper trials.

"The clinical trials do not have to be done in Indonesia. Data from the country the vaccines are from can be used as a basis for BPOM to evaluate and decide on emergency use approval," she said on Nov 26.

Indonesia has so far secured commitments for the shipment of 189 million vaccine doses from China's Sinovac, Maryland-based Novavax and Covax, an international Covid-19 vaccine allocation platform co-led by the World Health Organisation.

Brazil, Indonesia, Singapore and Turkey are among the countries expected to use CoronaVac as part of their vaccination programme.

Indonesia, South-east Asia's most populous country, plans to vaccinate 107.2 million of people aged between 18 and 59, out of its population of 270 million. Those with per-existing medical conditions or deemed unfit will not be included in the programme.

It has also set aside a buffer of 15 per cent for its vaccine stockpile. At two doses each, it would thus need 247 million doses in its stockpile by next year.

Indonesia had planned to start its vaccination programme as soon as November, but it had to be delayed, with a poorly organised phase three clinical trial of CoronaVac so far failing to garner the necessary data for the vaccine to be approved.

State-run drugmaker Bio Farma and the University of Padjadjaran in West Java, which began conducting the trial in August, have been unable to come up with an interim analysis, a prerequisite before the independent food and drug agency BPOM can review the vaccine for approval for emergency use.

With only 1,600 volunteers in the trial and a lack of people who represent the risk groups, such as medical workers, there is a lower chance that the required number of volunteers would be exposed to infections.

To test the efficacy of the vaccine candidate under the university's clinical trial, a minimum of 1.5 per cent of the 1,600 volunteers must have contracted the virus to then be monitored.

Brazil had recruited more than 9,000 volunteers - and roped in an ample number of medical worker volunteers - in its Sinovac vaccine candidate clinical trial and has thus been able to make better progress. - The Straits Times/Asia News Network 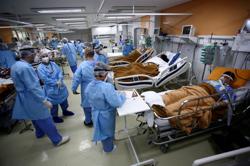