Indian media to be held responsible for foreign content

KOCHI (The Straits Times/ANN): New restraints on the publication of foreign reports in Indian newspapers are drawing attention to the Indian government's wariness about overseas coverage.

On Nov 25, the Press Council of India, India's main print media regulator, said it had received comments "by the government about the responsibility of Indian newspapers in publishing foreign contents", and declared that "unregulated circulation of the foreign content is not desirable".

The council advised media groups to "publish foreign extracts in Indian newspapers with due verification". The two-paragraph advisory warned that the "reporter, publisher and editor of such newspaper shall be responsible for the contents irrespective of the source from which it is received".

The Press Council is a statutory body partly funded by the government and headed by a retired judge of the Supreme Court of India.

On Nov 29, the Editors Guild of India, an independent group, said it was "perturbed by the unprovoked advisory".

The Guild said it was worried that the Press Council was supporting "a step that could bring in some form of censorship and punitive actions".

It said the "ominous sounding" advisory had "disturbing implications".

"We are looking into the notification from the Press Council. (I'm) unable to comment until there is clarity," said Mammen Mathew, chief editor of the Kerala-based Malayala Manorama, one of India's oldest and largest regional language newspapers.

Many Indian newspapers and websites carry syndicated reports and analysis from international publications such as The New York Times, Wall Street Journal and The Economist.

In August 2019, for example, following the scrapping of Jammu and Kashmir state's special status by Delhi, Reuters and the BBC reported on large protests opposing the measures. India's Home Ministry claimed the reports were fabricated, despite video evidence to the contrary.

In March, the Indian government sent rebuttals to several leading foreign media publications including The Guardian, Time, The Economist, and The Washington Post, complaining about their coverage of riots in Delhi in February that had killed 53 people, mainly Muslims

The chief of Prasar Bharti, India's largest public broadcasting agency, declined an invitation to a BBC event citing its "one-sided version" of police violence in Delhi.

In May, when India dropped two places to 142 on a global press freedom index published by the watchdog group Reporters Without Borders, India's information minister said the government would "expose" surveys that "tend to portray a bad picture" about press freedom in India.

The Press Council of India rejected the report because of "lack of clarity" about how it was prepared.

Adigital news editor told The Straits Times that an editors' group he was part of was "baffled" about what "foreign content" meant.

"Do they mean news about India in the foreign press, or foreign news like in Reuters about the US elections?"

He added: "It's part of creating of an environment of uncertainty. If our energies are sapped catching up with changing rules, we can't work on stories."

Last year, the government announced a 26 per cent limit on foreign direct investment in digital news.

In October, it said the CEO and a majority of directors on the board of any digital news media company would have to be Indian nationals.

They also have to get official security clearance for foreign nationals they employ for more than 60 days a year.

These new regulations led to the closure in November of Huffpost India, the Indian arm of US-based Huffington Post, when Buzzfeed bought the latter.

Buzzfeed CEO Jonah Peretti told the press that the company couldn't take on the India edition because "foreign companies aren't allowed to own news organisations" in India.

Over more than six years, Huffpost India had published many investigative reports, including on the Indian government's secretive election campaign financing scheme.

Successive governments have imposed restrictions on foreign media organisations, and these curbs have been tightened in recent years.

In May 2018, the External Affairs Ministry wrote to foreign news organisations stating that travel to certain "protected/restricted" areas such as Jammu and Kashmir required prior government approval, and requests had to be submitted eight weeks before the proposed trip.

In December 2018, Pulitzer-winning Irish photographerCathal McNaughton with Reuters was denied entry into India for allegedly travelling to Jammu and Kashmir without government permission. 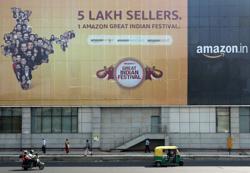