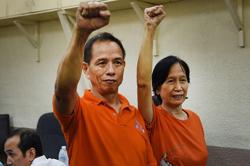 MANILA (Philippine Daily Inquirer/ANN): The Philippine National Police (PNP) is coordinating with the Armed Forces of the Philippines (AFP) for the arrest of Benito and Wilma Tiamzon who were recently found guilty of kidnapping and serious illegal detention of three military officers and a member of a narcotics command.

“We received already the directive of the SILG [Secretary of the Interior and Local Government] to initiate police actions and coordinate with our counterpart for the tracking of the Tiamzon couple, ” PNP chief Gen Debold Sinas said in a press briefing on Monday (Nov 30).

“We will be securing the conviction. I have already directed our CIDG [Criminal Investigation and Detection Group] to get a copy of the conviction and we have tasked our different intelligence units to coordinate with the AFP counterpart for the possible arrest, ” he added.

Sinas said the police will be willing to facilitate the surrender of the Tiamzon couple if they will decide to turn themselves in.

“We are hoping that they will coordinate with us if they want to surrender. We will be willing to facilitate their surrender and bring them to the appropriate court and jail to serve their sentence, ” he said.

In an 18-page decision, the Quezon City Regional Trial Court Branch 216 meted the penalty of reclusion perpetua or up to 40 years of imprisonment for the Tiamzon couple.

They were also ordered to pay for moral damages, civil indemnity, and exemplary damages.

The case stemmed from the kidnapping of Lieutenants Clariton Santos, Oscar Singson, Rommel Salamanca, and Abraham Casis of the Armed Forces of the Philippines and of Sergeant John Jacob of the Philippine Narcotics Command in Quezon province in 1988. - Philippine Daily Inquirer/Asia News Network 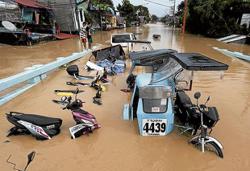