Ahmed Faysal was arrested under the Internal Security Act in Singapore in November. - MINISTRY OF HOME AFFAIRS

NEW DELHI (The Straits Times/ANN): Bangladeshi authorities are trying to gather more information about Ahmed Faysal, the 26-year-old construction worker who was arrested under the Internal Security Act in Singapore earlier this month for his alleged involvement in terrorism-related activities.

An official from the Counter Terrorism and Transnational Crime (CTTC) unit of the Dhaka Metropolitan Police told The Straits Times on the phone that a man named "Faysal" had cropped up in their investigations recently.

"We had no idea he was living in Singapore. All we knew is that he was someone living abroad and had been in online contact with some of our suspects," said Mr Saiful Islam, a deputy commissioner with the CTTC unit. Attempts are now being made to source more details on Faysal so that authorities can ascertain whether the two individuals are the same one.

Islam added that he had not received any information about Faysal's arrest before the media reports and that he also knew nothing about the 15 other Bangladeshi nationals who were deported from Singapore.

Faysal's radicalisation journey, which began in 2018 in Singapore after he was exposed to pro-Islamic State in Iraq and Syria (ISIS) materials online, has highlighted the continuing challenge for the authorities across the globe trying to crack down on online extremism.

Shafqat Munir, the head of the Bangladesh Centre for Terrorism Research in Dhaka, told The Straits Times, it is critical to map out the entire process that led to Faysal's radicalisation, including what his motivations may have been to carry out attacks.

Whether his radicalisation is closely related to what happened in France or does it go back even farther? These are the things authorities in Bangladesh and Singapore need to work closely on," he said.

Details from his interrogation have demonstrated the increasingly global nature of radicalisation, added Munir.

"A Bangladeshi national based in Singapore gets in touch with a Syria-based organisation and pretty seamlessly as well... This accentuates the seriousness of the challenge we face and it requires a significant amount of transnational cooperation to get to the bottom of this problem."

Faysal's desire to go and fight in Kashmir, for instance, could be an indication of how India's alleged human rights abuses in the region, together with anti-Muslim rhetoric from some sections of the Indian society, may have been exploited by terror groups to radicalise individuals in Bangladesh.

His choice of "Hindu police officers" as a target also fits into a trend of recent attacks on police establishments in Bangladesh by ISIS sympathisers, said Faiz Sobhan, senior research director at the Dhaka-based Bangladesh Enterprise Institute.

"I think the police - being part of law enforcement - is deemed in their eyes a legitimate target," he told The Straits Times.

Bangladesh witnessed some recent attacks targeting police personnel that were claimed by ISIS. In one such instance, a police station in Dhaka was bombed in July this year leaving four officers injured. The government, however, denied any ISIS links with the attack.

Hindus, who comprise less than 10 per cent of Bangladesh's population, have also come under attack from ISIS in recent years, and the group claimed responsibility for the beheading of a Hindu priest in February 2016.

There has been no major terrorist attack in Bangladesh since July 2016. The attack on the Holey Artisan Bakery, which left 22 individuals dead, was claimed by ISIS but Bangladesh blamed it on Jamaat-ul-Mujahideen Bangladesh, a home-grown outlawed Islamist group.

All the five gunmen involved in the attack were killed by police and seven other individuals, who were found guilty of planning the assault and supplying weapons, were sentenced to death in November last year.

The government led by Prime Minister Sheikh Hasina has repeatedly emphasised its "zero-tolerance approach to terrorism and violent extremism conducive to terrorism".

"While Bangladesh has made remarkable progress in curbing terrorism, there is a need for more long-term strategic measures to further limit that threat."

Fiercely proud of its syncretic traditions, Bangladesh has, in recent years, seen a growing tide of religious conservatism. This month, certain hardline Islamist groups staged an unprecedented protest against the construction of a sculpture of Sheikh Mujibur Rahman, the widely revered founding President of Bangladesh and Hasina's father.

Around 40,000 people also protested in Dhaka last month, following the republication of the Prophet's caricatures and France's tough stance on radical Islam.

Dr Shafi Md Mostofa, an adjunct lecturer at the University of New England in Australia, told The Straits Times that terrorist groups will seek to exploit the wave of "populist Islamism".

"If so many people can come out openly on the streets for this issue, then terrorist organisations can certainly use it as a trigger for radicalisation and capitalise on this internally," he said.

Dr Mostofa also warned about the impact of the Covid-19 pandemic on terrorism, saying it had transformed the physical world into a virtual one and made it possible for terrorist networks to propagate their ideology to a much wider audience than ever before because of increased online presence by individuals.

The crisis has devastated livelihoods across the world, including in Bangladesh, leaving many youth either unemployed or underemployed.

"Many have moved online during this pandemic harbouring such grievances, which leaves them more vulnerable to radical ideologies," he said.

Together with pre-existing problems, such as stark income inequality and endemic corruption, individuals in countries such as Bangladesh could become increasingly prone to radicalisation.

This required governments to be even more vigilant of online content that promoted extremism and violent thoughts, added Dr Mostofa.

"Opportunistic terrorist organisations will capitalise on every issue or failure. They will use this pandemic as well." - The Straits Times/Asia News Network 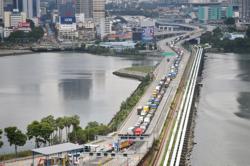