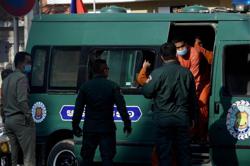 PHNOM PENH (Reuters): A Cambodian court was due on Thursday (Nov 26) to start the treason trial of more than 100 members and backers of the political opposition, in a case condemned by activists as a move by long-serving premier Hun Sen to crush his rivals.

A total of 121 defendants, all tied to the dissolved Cambodia National Rescue Party (CNRP), were summoned to appear on Thursday but many have fled into exile, convinced they would not get a fair hearing.

"It will be a show case with a verdict already decided, not by the judges but by the regime," CNRP's former deputy leader Mu Sochua told Reuters, adding that only 50 defendants would appear.

"More than 120 cases on the same date, the same time, by the same judges cannot be a fair trial," said Sochua, whose trial is at a later date.

Defendants and court staff were seen arriving amid tight security, with most media unable to enter what police said was a packed courtroom.

The CNRP was banned and its leader Kem Sokha arrested ahead of an election in 2018, allowing Hun Sen's Cambodian People's Party to win every parliamentary seat.

Kem Sokha's treason charges stem from accusations he conspired with the United States to overthrow Hun Sen, which both he and Washington have rejected.

Other defendants believe they are being punished for advocating the return from exile of Sam Rainsy, Hun Sen's biggest rival during his 35-year rule.

"This is not a legitimate legal proceeding but a show trial, a political theatre," said defendant Seng Theary, an American-Cambodian lawyer who said she had seen no indictment.

"It's a Kangaroo Court employing laws of the jungle," she told Reuters by email.

The government says the treason case is legitimate. Justice ministry spokesman, Chin Malin, said the trial would proceed like any other.

"The court will decide it according to matter of law and matter of fact," he said.

The opposition crackdown has strained Cambodia's ties with the West and prompted the European Union, its key export destination, to rescind special trade privileges. Experts say that has only pushed Cambodia deeper into the orbit of China. The U.S. Embassy in Phnom Penh last week said it was watching the trial closely and freedom of expression was "vital in a genuine democracy".

"We urge authorities to protect these freedoms," it said. "And to take meaningful steps to reopen civic and political space."