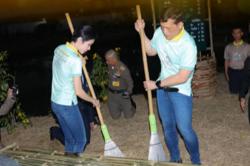 BANGKOK (Bloomberg): Pro-democracy protesters in Thailand planned to rally outside the main office of the nation's most valuable lender, in which King Maha Vajiralongkorn is the biggest shareholder, as they push for more transparency and accountability from the monarchy.

Siam Commercial Bank Pcl closed its headquarters in Bangkok on Wednesday (Nov 25) after protest groups announced a last-minute shift in venue following a police ban on gatherings within 150m of the Crown Property Bureau office, the original site of the rally, as well as a call by pro-royalist groups to hold a counter demonstration.

King Vajiralongkorn's wealth has become a key focus for protesters following legal changes after he ascended the throne in 2016 gave him the power to put his name on the assets of the Crown Property Bureau, which included holdings of prime properties in Bangkok and shares in major listed companies, including Siam Commercial.

They also consolidated management of the assets and eliminated the finance minister's role as the agency's ex-officio chairman.

The protesters have demanded those changes be revoked to make a clear division between the King's personal assets and other palace property they want under the control of the Finance Ministry.

They also want the national budget allocated to the monarchy be reduced in line with growth in Thailand's tourism-reliant economy, which has been hard hit by the pandemic.

The rally is in support for "reclaiming the assets that should belong to the people," Free Youth, one of the protest groups, said on Twitter.

The Bureau of the Royal Household declined to comment, and the Crown Property Bureau didn't answer calls seeking comment made after business hours on Wednesday.

The government and security agencies "will now enforce all laws available to deal with protesters who break the law and ignore other people's rights and freedom," he said last week.

"The protest situation is still escalating and may lead to more conflict and violence," Prayut said.

"If we allow this to continue, it would cause damage to our nation, our beloved monarchy, and the peace and safety of the general public."

The youth-led protest movement is calling for a more equal and democratic society with a more accountable monarchy and an end to military coups.

They're also seeking the resignation of Prayut, a former army chief who led a 2014 coup, and a rewriting of the constitution that helped Prayut retain his power after elections.

The protesters earlier chose to hold a rally in front of the Crown Property Bureau because they "want to strike a blow to the financial basis for the King's power and wealth," said Tamara Loos, a professor of history and Thai studies at Cornell University in Ithaca, New York.

"These young protesters have permanently transformed public culture regarding the monarchy, which will be subject to continued critique," she said.

"Cracking down on protesters now only delays a future conflict between those who want genuine change in Thailand's political institutions and the military."

Last week, the King appointed one his close aides, former army chief Apirat Kongsompong, as deputy head of the Crown Property Bureau. During his time as army chief, Apirat was vocal in his attacks on the opposition and pledged to defend the monarchy.

Lawmakers last week voted on a pathway to set up a charter rewriting committee but rejected any amendments to the monarchy-related section of constitution. 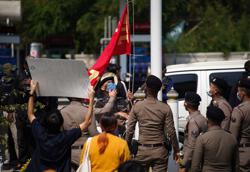