BANGKOK (The Nation/ANN): A Philippine national and a Thai woman have been arrested for running a company that allegedly scammed people into investing in a loan business from an office here.

“Immigration police acted on a tip-off from Philippine victims who live in Thailand that the company named Filipino Cooperative Investment Loan, which was registered by the two suspects, had allegedly scammed them into investing in a loan business that boasted of giving 15 per cent profit within a month, ” he said.

“The company had been advertising via online media and amassed more than 700 victims. A preliminary investigation revealed that it had a rotating investment of over Bt50 million per month, ” Sompong said.

“The company would pay the profit as promised in the first few months but then stop and cut off all contact with the victims, ” he said.

“Liny was widely known as the ‘Queen of Scammers’ in Philippine media, while the estimated damage to victims caused by her company is 116 million pesos, or Bt75 million, ” Sompong added.

After the arrest, the two suspects were taken to the Economic Crime Suppression Division for interrogation and the pressing of charges. - The Nation/Asia News Network 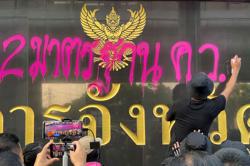