The IDX logo is seen in front of a giant screen that displays information of the movement of stock prices at the Indonesia Stock Exchange (IDX), Jakarta, on March 13, 2020. - JP This article was published in thejakartapost.com with the title "US election result likely to positively affect JCI, trump negative sentiment: Analysts". Click to read: https://www.thejakartapost.com/news/2020/11/06/us-election-result-likely-to-positively-affect-jci-trump-negative-sentiment-analysts.html.

JAKARTA (The Jakarta Post/ANN): The result of the United States election is expected to create a positive lasting effect on Indonesia’s stock market in the mid- to long-term, offsetting the negative sentiment among investors from the recession, analysts have said.

“Biden’s approach to China is expected to be more predictable compared to [President Donald] Trump’s, which was more impulsive, and who often changed his statements, ” he said in an e-mail.

He also expected the US dollar to weaken under Biden, making commodity prices move in an upward trend. This would work in favour of Indonesia as a country that exports commodities, he said.

“I expect the JCI to continue on its upward trajectory at least until the end of 2020 due to investors’ forward-looking stance, ” said Hariyanto.

The economic uncertainties caused by the Covid-19 pandemic have led investors to dump risky assets and resort to safe havens. Stock markets in emerging economies, such as Indonesia, have seen hefty capital outflows since March

The JCI’s bullish move was in line with other Asian indices. Japan’s Nikkei average rose 0.9 per cent to almost its top level in years.

Earlier this week, Biden’s campaign stated that the former US vice president was on track to win the 2020 election against Trump, as he was moving closer to securing 270 votes in the state-by-state Electoral College to determine the winner, according to a Reuters report.

The positive sentiment in a Biden win would offset the negative sentiment following the latest announcement of Indonesia’s gross domestic product (GDP) contraction in the third quarter, which was deeper than analysts’ projection, Hariyanto said

Southeast Asia’s biggest economy has officially entered its first recession since 1998 as its GDP shrank 3.49 per cent on an annual basis in the third quarter, Statistics Indonesia (BPS) announced on Thursday.

The figure is worse than the 3 per cent contraction forecast by a Reuters poll of analysts, as well as President Joko “Jokowi” Widodo’s expectation, but is still narrower than the second quarter contraction of 5.32 per cent.

Hariyanto added that investors had factored in an economic recovery, predicted to start in 2021 once a Covid-19 vaccine is widely available for the public.

However, he warned that risks would still loom over the country’s stock market if Indonesia failed to begin Covid-19 vaccination on time by next year.

Samuel Sekuritas analyst Suria Dharma echoed Hariyanto’s sentiment, saying that the JCI would still face risks if the government failed to contain the coronavirus outbreak next year, as it would hamper economic recovery.

Another risk would also come from the uncertainties surrounding the US election, he said.

As the world’s largest economy continues to count the vote from mail-in ballots, determining a winner might require a few more days.

“If he [Trump] decides to take the election result to the Supreme Court, this would create prolonged uncertainty that could negatively influence the market, ” he said.

Despite the risks, Suria believed that the JCI would benefit from Biden’s high chance of winning the election.

He also projects the mining sector to reap the most benefits from a Biden victory.

The Democratic candidate’s plan to invest US$2 trillion in green energy and proposal to ban new leases for oil and gas drilling on public land are expected to benefit Indonesia’s mining sector.

“This policy would be good for the nickel sector due to increased need for batteries, ” said Suria.

A ban on drilling, as well as Biden’s anti-Russia view, would also benefit the oil and gas sector as the limited supply and the heated tension with one of the world’s biggest oil and gas producers would drive up oil prices in the future, he said.

Meanwhile, Trimegah Sekuritas economist Fakhrul Fulvian said that the consumer sector would be the least advantaged in the mid- to long-term.

“The slight rebound in consumption [in the third quarter] caused market players to seek other more favourable sectors amid the possibility of higher inflow to the market, ” he said. 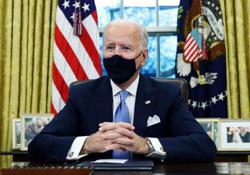