VIENTIANE (Vientiane Times/ANN): The government says a new urban development master plan will help authorities respond to the rapid growth of Vientiane in the coming decades.

The capital currently extends to different areas without proper management, with marshes, canals and streams being covered over by construction projects, resulting in flooding.

Unorganised development because of a lack of detailed planning has made it difficult for authorities to cope with the rising number of vehicles and growing population in the city centre.

Speaking at the ongoing National Assembly session on Tuesday, Minister of Public Works and Transport Dr Bounchanh Sinthavong said roads in the capital are not sufficiently straight and do not meet standard requirements, while public spaces have not been preserved.

The minister outlined the reasons why it had become necessary to draw up a new master plan to ensure Vientiane is acknowledged as a livable city in the region.

Under the new scheme, Vientiane will be developed into several sub-centres to expand the town and reduce traffic congestion in the city centre.

The new master plan will cover an area of 61,600 hectares and 288 villages, representing 16 percent of the city’s land area.

The government has defined seven plans of action and 79 projects to fulfil the objectives of the scheme.

These will improve the road network and public transport, conserve historic and heritage buildings, and relocate public facilities towards the suburbs.

The Km 21 area is being developed as an industrial zone while the 450 Year Road is defined as a real estate zone.

Tha-ngone is defined as an area for the relocation of public offices while Phialath village in Sangthong district, Hay village in Pakngum district, Thadeua village in Hadxaifong district, and the Dongmakkhai zone in Xaythany district will be developed as new urban areas.

The first master plan for the development of Vientiane was endorsed in 1991, covering an area of 9,300 hectares in 100 villages in the districts of Chanthabouly, Sisattanak, Xaysettha and Sikhottabong.

A second plan was approved in 2002, extending the urban area to 20,250 hectares and involving 180 villages.

This is now the third master plan and was approved at a cabinet meeting in February 2019 and by the National Assembly’s Standing Committee in September this year.

The master plan also places a focus on providing low-cost residential areas and building a drainage system that will cope with flooding.

With a population of almost one million people, Vientiane has high economic and demographic growth potential. It is likely that urban areas will rapidly expand towards the suburbs along arterial roads. Without sufficient infrastructure, an urban sprawl will result with poor living conditions and inadequate social services, and the city’s dwindling pastoral charms might be entirely lost.

To counter this problem, appropriate measures must be taken promptly based on a comprehensive urban development plan. - Vientiane Times/Asia News Network 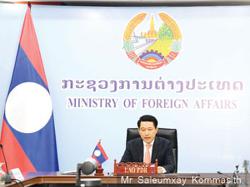