India should not follow US blindly to contain China, says China Daily editorial 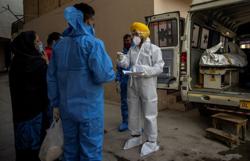 US Secretary of State Mike Pompeo and India's Foreign Minister Subrahmanyam Jaishankar stand during a photo opportunity ahead of their meeting at Hyderabad House in New Delhi, India, Oct 26, 2020. [Photo/Agencies]

US Secretary of State Mike Pompeo and Defense Secretary Mark Esper are scheduled to hold a 2+2 ministerial dialogue with their Indian counterparts in New Delhi on Tuesday. The meeting, marking the last major diplomatic and strategic move from the United States just a week before the US presidential election, certainly comes laden with meaning.

The Indian side said last week that the agenda for the annual dialogue, the third since 2018, will cover bilateral, regional and global issues of mutual interest, while media reports say the US is likely to sign the Basic Exchange and Cooperation Agreement with India at the meeting.

If signed, the BECA will be the fourth agreement between the two countries in bilateral military exchanges. It reportedly focuses on military intelligence sharing, which will lift their military ties to the level of a quasi-military alliance.

Thus, one obvious goal of the US-India dialogue is to strengthen bilateral security cooperation, which accords with Washington's intensifying attempts to cozy up to New Delhi to cater to its Indo-Pacific strategy.

With the novel coronavirus still raging in both countries, the high-profile face-to-face meeting shows the great importance the US attaches to its relations with India and underscores India's irreplaceable role in the implementation of the US' Indo-Pacific strategy.

As such, the presence of both Pompeo and Esper in New Delhi this week highlights how determined the administration is to rope India into its attempts to contain China's rise.

Yet whether the BECA will be signed in full still remains to be seen. Besides, due to its own ambition to become a major power, India may not even want to be seen as actively dancing to the US tune, especially in the strategic field. It will be better positioned in a multipolar world, not a bipolar, or even a unipolar world, to realize its ambition.

True, border skirmishes with China may prompt India to draw closer to the US side so as to gain more leverage in its negotiations with China. But, blindly following the US' lead will only push it closer to a head-on conflict with China, which would not be in its interests. Just like China, India, too, needs a peaceful external environment for development.

As for the US administration, it will be hoping that escalating its anti-China campaign will help head off criticism at home over the pandemic and racial discrimination. The world does not need to wait very long for an answer as to whether such an ugly, self-serving tactic will work.