This combination of file pictures created shows (fom left) activist Parit "Penguin" Chiwarak speaking at a demonstration in front of the army headquarters in Bangkok, Student Union of Thailand spokesperson Panusaya "Rung" Sithijirawattanakul speaking during a press conference by the United Front of Thammasat and Demonstration at Thammasat University in Bangkok, and activist Panupong "Mike" Jadnok speaking to the media as he arrives at the Criminal Court to answer charges of violating his bail terms in Bangkok. Bail petitions for pro-democracy protest leaders Rung, Penguin, and Mike were dismissed on Saturday (Oct 24, 2020) on the grounds if they're freed they could inciting unrest again, their lawyer Krisadang Nutcharut confirmed to AFP.

BANGKOK, Oct 25, 2020 (AFP): Prominent leaders of Thailand's pro-democracy movement vowed to return to the streets Sunday to protest against Premier Prayut Chan-O-Cha, after their deadline for him to resign was ignored.

The former military chief who staged the 2014 coup is facing pressure from a student-led movement that has organised massive demonstrations for months calling for his resignation.

They regard his hold on power -- renewed after last year's widely disputed elections -- as illegitimate and on Wednesday had given him three days to step down.

As the deadline for Prayut to resign by 10pm on Saturday (Oct 24) came and went, activist Jatupat "Pai" Boonpattararaksa said protesters would turn out in force Sunday at a major Bangkok intersection.

"We hear the answer from the Prime Minister to our request," Pai told a crowd outside Bangkok's Remand Prison, where protesters had gathered to call for the release of fellow activists.

"Tomorrow as citizens, we will protest against Prayut at Ratchaprasong at 4 pm (0900 GMT)."

Prayut remained resolute Saturday while attending a prayer ceremony for the country at a historic Bangkok temple, saying that "all problems can be resolved" through compromise.

"The government has real intentions to solve problems as long as it's under the line of laws," he told reporters, adding that he "won't quit".

The movement is largely leaderless though the different groups are united when it comes to their demands for an overhaul to Prayut's government.

Some are also issuing controversial calls for reform to the kingdom's unassailable monarchy, questioning the role of King Maha Vajiralongkorn in Thailand -- once a taboo act due to draconian royal defamation laws.

Another group called the People's Movement announced a march to the German Embassy on Monday afternoon -- in apparent defiance of the king, who spends long periods of time in Germany. 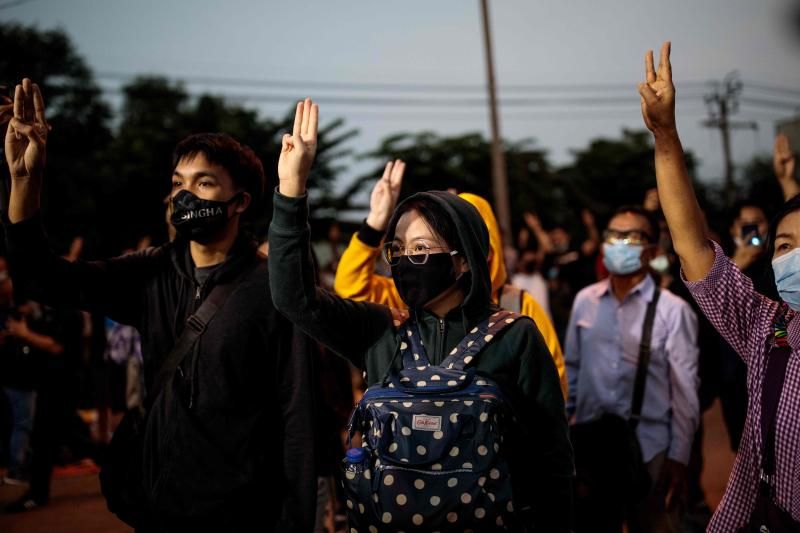 The monarch has been back in Thailand for the past week and a half to commemorate a Buddhist holiday and the death of his late father Bhumibol Adulyadej.

He has not commented on the demonstrations, despite growing tension in Bangkok as protesters grow bolder in their challenge to the royal institution.

But the king has made rare public visits with his supporters waiting outside the palace -- a charm offensive for an army of local and international media.

On Friday, he broke with royal protocol to praise a man who had held up a portrait of the king's parents at a pro-democracy rally.

"Very brave. So good. Thank you," the king told the man according to footage posted on Facebook.

That quote was trending as a hashtag on Twitter in Thailand following the interaction.

Also top-trending on Sunday morning was the hashtag "25 October mob" -- a sign that protesters were preparing to gather for Sunday's rally.

Prayut had initially imposed emergency measures banning gatherings of more than four, but lifted it a week later when it failed to quell tens of thousands showing up to guerrilla demonstrations across the capital.