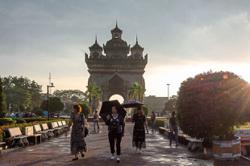 A total of 115 law enforcement officers from the four countries participated in the operation, with five vessels navigating 512 km of the river over a period of four days and three nights, according to the Yunnan provincial public security department.

The officers examined 25 vehicles, 39 people and 23.6 tonnes of cargo during the joint patrol.

The Mekong River, known as the Lancang River in China, is a vital waterway for cross-border shipping among China, Laos, Myanmar, Thailand, Cambodia and Vietnam.

China, Laos, Myanmar and Thailand have been carrying out joint patrols on the Mekong River for eight years.

Meanwhile, back home in Laos, over 15,000 people from more than 3,000 families have been relocated to temporary shelter centres and schools in Savannakhet province since floodwaters inundated eight districts on Oct 6.

“Many families in Xonbouly, Champhon and Songkhon districts are moving out of flooded areas because the water is continuing to rise. These districts are located along the Xebanghieng River so local residents have been particularly hard hit.”

“Soldiers and rescue teams from Savannakhet and Vientiane, along with local authorities, are using boats to help people move their belongings and household equipment, ” she said.

“We have provided rice, drinking water and other essentials to those staying in temporary shelters and schools but they are still in need of food, more rice and drinking water, and other daily necessities, ” Thoummy said.

Many houses have been damaged or destroyed and authorities are in the process of assessing the extent of the damage before requesting assistance.

As initial assistance, on Friday the Ministry of Labour and Social Welfare will provide 20 tonnes of rice and 200 million kip in cash for the flood victims.

The eight districts were hit by two storms on October 6, and 142 villages that are home to over 5,000 families have been affected by flooding. The districts affected are Xepon, Nong, Virabouly, Phin, Champhon, Xonbouly, Songkhone, and Thapangthong.

Roads have also been affected and manu cattles, pigs and other livestock have been reported missing or dead.

People in many places have developed diarrhoea and skin ailments.

Residents living alongside main rivers have been alerted to the possibility of flooding following further rainfall in the central provinces, especially in Savannakhet and Khammuan, with everyone in low-lying areas also advised to be prepared for floods.

More rain is expected across many parts of the country and everyone is advised to monitor the news and weather forecasts for updates. - The Vientiane Times/Asian News Network