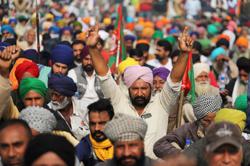 A healthcare worker takes swab from a man for a rapid antigen test in a market area, amidst the Covid-19 pandemic in Ahmedabad, India. India added fewer than 60,000 new cases for a fifth day Friday, with the 54,366 new cases taking the overall tally past 7.76 million. - Reuters

NEW DELHI, Oct 23 (AP): A promise of free Covif-19 vaccination has become an issue in key state elections in India.

Finance Minister Nirmala Sitharaman made the promise when releasing the ruling Hindu nationalist party’s manifesto for elections that begin in Bihar state next week.

Every Bihar resident will be given vaccinated for free when a Covid-19 vaccine becomes available, she said, adding at least three vaccines are in the final trial stage and are on the cusp of production in the country.

The promise angered the Congress and other opposition parties who accused Prime Minister Narendra Modi’s party of politicising the pandemic and playing on people’s fears.

Bihar is India’s third-largest state with about 122 million people.

It has the second-most cases in the world behind the US, though cases have declined in recent weeks. Modi and others have urged continued vigilance during ongoing religious festivals and the cold season.

The Health Ministry also reported 690 deaths in the past 24 hours, raising total fatalities to 117,306.

Deaths in India have been relatively low, with 117,306 mortalities from the coronavirus, out of which 690 were reported in the last 24 hours, the ministry said. - AP 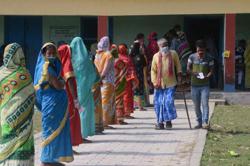