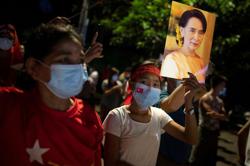 Supporters of the National League for Democracy (NLD) Party wave their party's flags during an election campaing in Naypyidaw. Three of their candidates have been kidnapped by the Arakan Army group in the Rakhine state, it was confirmed on Monday night (Oct 19). - AFP

Militant group the Arakan Army (AA) has for nearly two years been locked in battle against the military, fighting for more autonomy for the state's ethnic Rakhine population.

Both sides stand accused of rights abuses, with hundreds killed or injured and some 200,000 forced to flee their homes in an area under a strict lockdown that makes independent reporting practically impossible.

With the election three weeks away, gunmen descended Wednesday on a campaign event for Suu Kyi's National League for Democracy (NLD) in Taunggok township in southern Rakhine, an area relatively unscathed by the violence.

Eyewitness and NLD supporter Thant Zin Phyo told AFP how he and around 10 other men and women had been beaten and called "traitors", before the gunmen left with candidates Min Aung, Ni Ni May Myint and Chit Chit Chaw.

After five days, the AA Monday posted a photo online of the trio next to NLD paraphernalia, confirming it had been behind the abduction and accusing the NLD of "collaborating and covering up war crimes committed by the Myanmar Army".

The group added the prisoners would be released if the government freed all innocent people "arrested and detained unlawfully for demanding peace".

"We denounce and reject any act that can harm the free and fair election," he added.

Suu Kyi's party is widely expected to be returned to power in the national polls -- only the second since the nation emerged from outright military rule.

But there are huge questions about the vote's credibility, particularly in Rakhine.

Virtually all Rohingya Muslims are disenfranchised, either languishing in refugee camps in Bangladesh or stripped of citizenship and rights in Myanmar. On Friday, the election commission also announced that security concerns meant the vote would be cancelled across swathes of the country, including most of Rakhine.

Many in the state have long felt marginalised by the ethnic majority Bamar, fuelling support for the AA's insurgency.

"I think there could be a serious military response in Rakhine State," predicted Yangon-based analyst Mg Mg Soe, adding election candidates might now be too afraid to campaign.

But NLD stalwart Thant Zin Phyo told AFP the kidnappers would not frighten him into submission.

"Pointing a gun at us will not change our support for the party and flag."

As for the virus pandemic situation in the country, Myanmar reported 1,180 more confirmed Covid-19 cases on Monday, according to a press release from the Ministry of Health and Sports on Tuesday (Oct 20).

The newly confirmed cases brought the number of infection cases of Covid-19 in the country to 37,205 in total.

A total of 34 more Covid-19 deaths were also reported in the country on Monday, bringing the death toll in the country to 914 in total, the release said.

According to the ministry's figures, 17,568 patients have been discharged from the hospitals so far.

A total of 529,213 samples have been tested for Covid-19 so far, the ministry's figures showed. 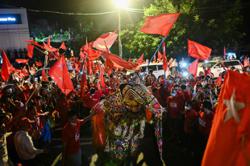 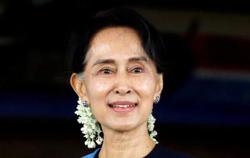