A vendor arrangeing ‘Biryani’ a traditional mixed rice dish, sitting on his push-van while waiting for customers in the old quarters of New Delhi on Saturday (Oct 17, 2020). - AFP

The BJP leader identified as Dayashankar Gupta was killed Friday night in Firozabad district, about 285 km west of Lucknow city, the capital city of Uttar Pradesh.

"We are being told last night three bikers fired upon Dayashankar Gupta here. Though he was removed to the hospital, however, he succumbed on way," a police official said.

"He was attacked after he was walking through a marketplace after closing his shop."

Police have detained three people in connection with the murder, apparently on the allegations made by Gupta's family.

"We are investigating the case and the people in detention are being questioned," the police official said.

In August also, a BJP leader was shot dead near his home in Baghpat district of the state.

There are now 795,087 active cases in the country, while 6,524,595 people have been successfully cured and discharged.

This is the first time when the number of active Covid-19 cases has fallen below the 800,000-mark since the pandemic peaked in india.

The Indian government's focus has been on ramping up Covid-19 testing facilities across the length and breadth of the country.

Up to Friday night, a total of 93,254,017 Covid-19 tests had been conducted, out of which 999,090 tests were conducted on Friday alone, according to the data from the indian Council of Medical Research (ICMR).

Two days ago cinema halls, theaters and swimming pools were reopened in the country after nearly seven months, amid strict Covid-19 restrictions like social distancing and regular sanitisation drives. 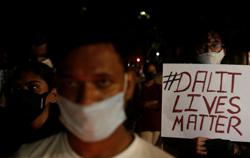