SINGAPORE (Bloomberg): The global aviation industry will take at least two years to recover from the coronavirus pandemic and for mass travel to return, Singapore's Transport Minister Ong Ye Kung said, stressing the importance of developing a widely available and effective vaccine to help countries open their borders.

"When a vaccine is widely available around the world and people gain confidence to travel again and visit other countries, then we will have aviation back on its feet, almost fully," Ong said in an interview with Bloomberg Television.

"How long that will that take, I can't make a guess; I would say minimally a couple of years."

Singapore has to "find ways to try to revive" the aviation sector, the minister said, adding that Singapore's testing capacity is now around 30,000 a day and may rise to 40,000 by November and probably further after then. A balance needs to be struck between travel and epidemic control, he said.

Asked about Singapore Airlines (SIA), which posted a record quarterly loss in the three months through June and is reducing its workforce by about 20 per cent, Ong said the carrier faces a "dire situation" because of the pandemic and the fact that it has no domestic market to fall back on.

Virus-related travel restrictions mean SIA, which raised $11 billion largely through a rights issue earlier in the crisis, is flying at a tiny fraction of its usual capacity.

Traffic figures for August show the carrier's passenger numbers were down 98.4 per cent from a year earlier.

Whether SIA needs to raise more funds will largely depend on how successful any revival in travel is, Ong said.

"The more we can revive, the more cash they can generate, the less their need for recapitalisation."

A regulatory filing in August showed the airline had used half of the $8.8 billion it raised through share sales, highlighting that carriers keep incurring expenses even when planes are left idle. The company is reviewing its fleet and operations.

The International Air Transport Association (IATA), which represents some 290 airlines, has said it doesn't see passenger traffic recovering until at least 2024.

A recent IATA survey of travellers found that 83 per cent said they wouldn't travel if it involved a 14-day quarantine period.

To open borders and encourage people to travel again, quarantine must be replaced by effective Covid-19 testing, Ong said.

"We have to gradually open up the borders, establish the key links that made us a hub."

Ong said Singapore will need to review plans for a fifth terminal at Changi Airport. Construction of the terminal, originally planned to be completed in 2030, has been suspended for at least two years.

"The assumptions when we went into Terminal 5 have totally changed," he said.

Singapore has pledged about $100 billion in stimulus measures to fight the effects of the pandemic, including wage subsidies that will last until March.

In a further bid to revive travel, Singapore will allow cruises to nowhere later this year. Genting Cruise Lines’ World Dream and Royal Caribbean International’s Quantum of the Seas will begin round-trip journeys from November and December respectively.

Genting received more than 6,000 bookings in five days for its voyage, while Royal Caribbean’s bookings are up 500 per cent compared with the past two weeks, the Straits Times said on Tuesday.

The vessels will sail at a reduced capacity of 50 per cent and the journeys are open only to residents of Singapore.

“The biggest defence is that (the passengers of) the cruises are all residents of Singapore and we have very low incidence rates, ” Ong said.

“It’s no different from any country now where pubs are open, people are socialising.” 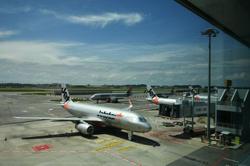