JAKARTA, Oct 9 (The Jakarta Post/ANN): The police have arrested more than a thousand demonstrators following a series of protests against the Job Creation Law in several regions across the country.

“They are not workers who came to voice their opinions, but a group of high school students who came to deliberately incite riots, ” Yusri said on Friday as quoted by kompas.com.

He claimed investigators had found text messages asking students to incite riots during the rally.

The police also claimed that certain people sponsored their trips to the capital by paying for their bus or train tickets.

In Medan, North Sumatra, authorities arrested 177 protesters during a rally in front of the North Sumatra Legislative Council (DPRD) building.

They were immediately taken to the North Sumatra Police headquarters to undergo questioning and rapid antibody testing for Covid-19.

Medan Police chief Sr. Comr. Riko Sunarko said the investigations into the arrested demonstrators were still underway. The police had yet to decide whether to release them. 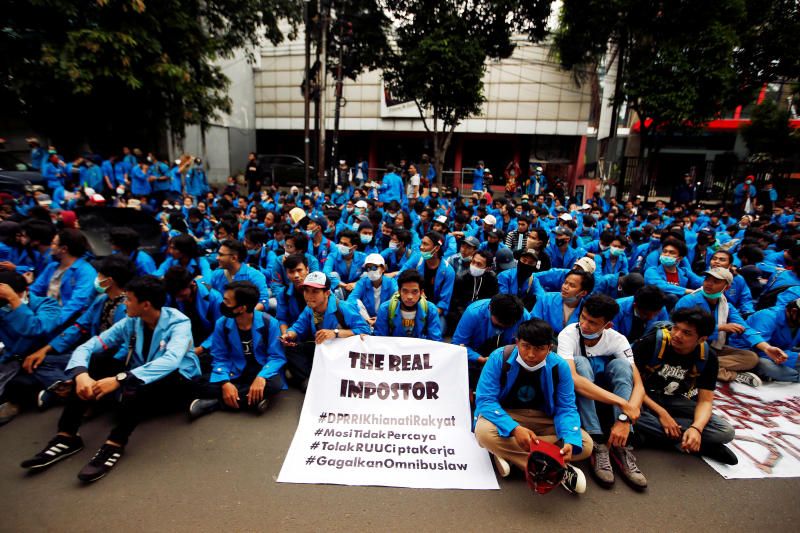 University students hold a banner while resting on a main road to protest against the government's labour reforms in a controversial jobs creation law in Jakarta, Indonesia, Oct 8, 2020. - Reuters

He said the injured officers had received medical assistance. Rallies in protest of the contentious omnibus law continued on Thursday, three days after the law was passed by the House of Representatives on Monday. Some turned violent as protesters clashed with police.

Reports of clashes, arson and arrests had come from at least a dozen cities and metropolitan areas, including Greater Jakarta; Yogyakarta; Medan, North Sumatra; Makassar, South Sulawesi; and Denpasar, Bali.

Protesters demanded the law to be revoked immediately, as scholars, activists and labor leaders have called the law a setback to worker’s rights and environmental protection in the country.

However, the government has insisted that the law is necessary to cut red tape and improve bureaucratic efficiency, particularly to improve business licensure and attract foreign investment.

According to the ministry, 3,607 more people were discharged from hospitals, bringing the total number of recoveries to 247,667.

No more new infections were detected in the four provinces of Riau Islands, Lampung, Maluku and North Maluku. - The Jakarta Post/Asian News Network